First of all, the amount of hilarious Jungle Book puns that easily present themselves in this review are often irresistible. For this, we apologise in advance.

For a fairly new brand, Mowgli has grown really quickly with locations in Birmingham, Liverpool, Oxford and Manchester. The concept is small plates of Indian street food and authentic home-cooked, fresh dishes from creator Nisha Katona’s family kitchen. With Kar-O-Bar down the road with a similar offering, we were wondering who would come out top in the battle of the indian small plates restaurant. Mowgli has opened up in ever-vibrant Hockley, on the corner of Goosegate and Stoney Street. With its bright, bold lettering, lighting and huge bifold doors that reveal the swing chairs, it really stands out. 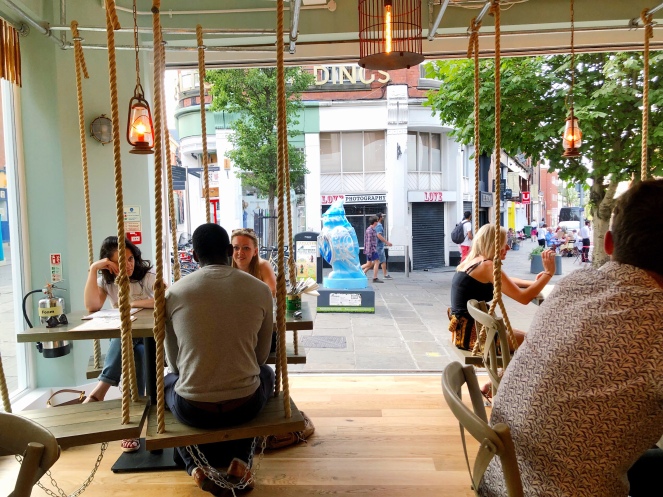 There’s a really interesting thing that Mowgli have on their menu. Alongside the curry dishes, grill dishes, street bites and an pretty extensive veggie/vegan section you can order the ‘pot luck’ tiffin boxes. Essentially, you don’t know what you’re going to get, it’s whatever is cooked fresh in the kitchen and everyone gets something different. You can order one that has a mix of veggie and meat dishes or one that’s completely veggie, both with an order of (rather delicious) spiced basmati rice. If you’re also ordering other dishes, they promise not to double up with the tiffin surprise. Ooh intriguing, a mystery dinner! How could we resist! Forward our mail to the edge, cus that’s where we’re living! Also both our middle names are Danger.

We ordered the ‘Office worker’s tiffin’ which is 4 layers of meat, veg and rice to share. What’s better if you’re spoiled for choice? Alongside this, there were some street chat and grill dishes we couldn’t resist: the angry bird grilled chicken thighs with slaw (that a fellow blogger recommended to us as unmissable) and the yoghurt chat bombs – you’ve gotta have something cooling and crisp with those curries!

The food came in a really reasonable amount of time, the chat bombs were first – little pastry puffs filled with tamarind chutney, yoghurt, chickpeas and coriander.

We were advised to chuck them in our dribbly gobs whole and not to even try biting them in half or they’d fall apart! Challenge accepted, I bit one in half and it went everywhere. I was warned. These are really lovely little morsels of complex, complementary flavours: sweetness from the tamarind, creaminess and tanginess from the yoghurt, crunch from the pastry and aromatic freshness from the coriander with a pop of sweet and sour pomegranate. It’s a beautiful marriage in your mouth and these have become a staple part of every order we have at Indian street food places. Lush.

We were excited for the big tiffin reveal, wondering what dishes we were going to get! Would it pay off?! We ended up with the house chicken curry, the house lamb curry, the tea-steeped chickpeas and spiced basmati rice – not bad! We also ordered a roti to go with the curries. 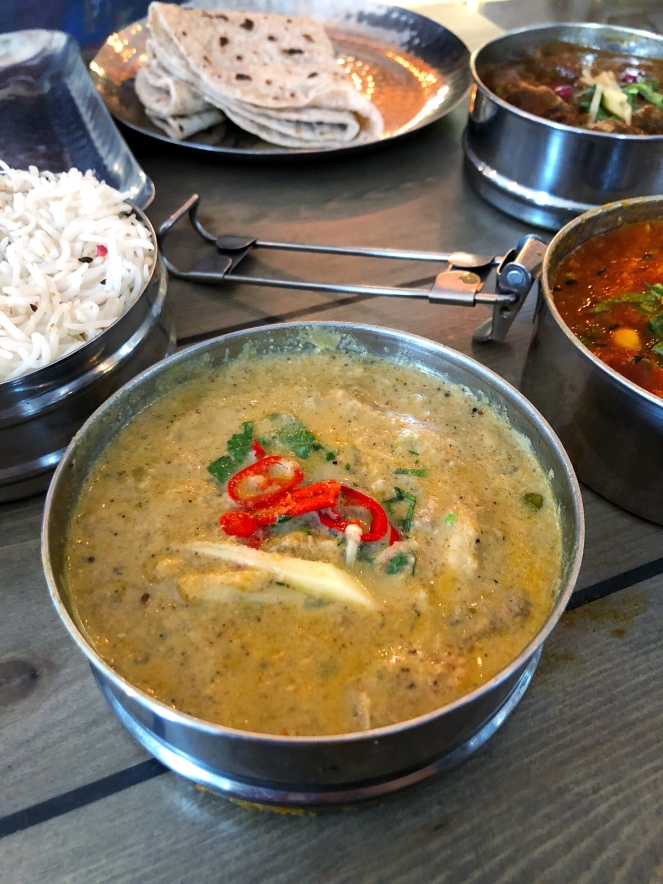 House chicken curry first – not something we would normally have ordered because it sounded like a korma and we didn’t want it to be bland and boring. But that’s the beauty of the pot luck tiffin boxes, they push you to try something you wouldn’t ordinarily have picked – and we were so glad. Just imagine the best korma ever, forget all the, creamy, sugary, yucky ones from the supermarket and imagine rich coconut and delicate spicing with super tender, delicious chicken breast and a gorgeous natural sweetness. It was fragrant and nutty with ground almonds and really delicious. We kept going back for more.

In contrast, there was a dark, heady, debauch richness to the house lamb curry. The meat literally fell apart it was beautifully cooked and there was a surprising hit of sweet and sour from plums and fragrance from anise and cinnamon. That fresh ginger really lifted it as well. This is NOT your standard lamb rogan josh, it’s fruity, spicy, warming and complex – really interesting and fabulous with unexpected morsels to discover. A hug in a tiffin box!

After two absolute stunners, we were let down by the vegan tea-steeped chickpeas.

After the layers of spicing and complexity in the house curries, this dish really lacked. After a while, it just began to taste bland, like tinned tomatoes with chickpea and spinach stirred through – we couldn’t taste any tea at all. Not one we would order again and we wished we would have had one of the lentil dahls in the tiffin box, which we’ve seen rave reviews for. We hope to return to see if the rest of the veggie dishes are any better. No biggie, lesson learned! 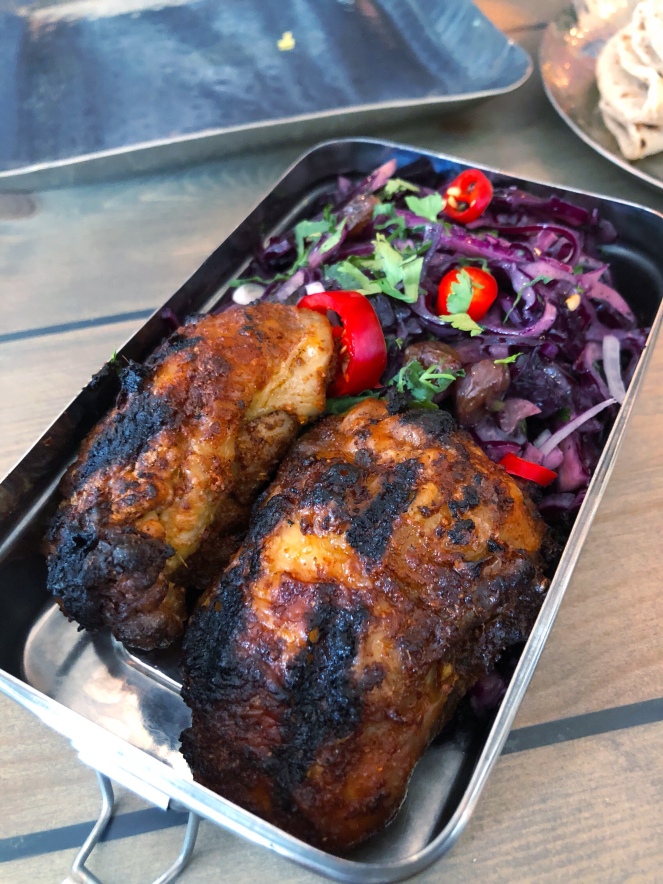 The angry bird was up next! This truly is a delicious dish, the boneless thighs were marinated in tandoori spices so the meat was succulent and spicy all the way through, with serious smoky char and crispy skin from the tandoor grill. The slaw was unlike any other, it had a tangy popped mustard seed dressing and sweetness from sultanas in the red cabbage. It was absolutely gorgeous, especially with the soft, spiced chicken and heat from fresh red chilli. Another winner here.

A bit on the sides: spiced basmati rice? YES! forget your boring boiled white stuff, Mowgli steam theirs with cumin and cardamom and it’s so moreish.

We weren’t as thrilled with the roti, we hoped for paratha-style butter naan with delectable layers, but it was more of a wheat flatbread. If you want a good paratha pop down the road to Kar-O-Bar, they do a great one when cooked fresh.

Overall, we had a good experience with the food here and we’re already itching to go back and have the house curries again, as well as to try some of the more unexpected menu items like the Goan fish or the bunny chow served in a loaf of bread! It’s a cool concept, we really like that you don’t have to commit to one dish or curry, you can try lots together and compare and contrast their delicious, complex flavours. We think it’s a good addition to Hockley and a great place to go with friends/on a date because it’s so easy to share, catering for all diets. The relaxed atmosphere feels special and cosy while still being quite casual, but we wouldn’t ever pop in for a good drink and snack, unlike our favourite Indian street food restaurant, Bundobust. You do have to have a sit down meal, really. Price wise, it wasn’t too bad. Around £40 for 6 dishes and two halves of lager; for that we left full up. And, with the unique suspended rope chairs, you’re sure to be the king of the swingers, the jungle VIP. So just go ahead and (Jungle) Book a table, ok? Told you those puns were coming!