The Wilford Green pub is back! But boy, not as you know it. A new team have taken over and transformed it into a smart gastropub with a brand new menu and refurb – all while keeping its warmth and charm. We were invited down to sample the menu of modern, British favourites.

Firstly, the atmosphere at The Tailor’s Arms is great, even the addition of quirky flamingo wallpaper and super modern furnishings somehow still nurture a warm and inviting lounge feel. We started with some fab gin and tonics from the extensive cocktail menu, mine in particular was deliciously garnished with charred pineapple which added a unique tropical yet smoky flavour. Yum!

The menu is clearly modern British but it does have some surprises amongst the pies and fish and chips, such as a Kashmiri curry. It seems compact yet perfectly formed, hopefully allowing the restaurant to focus on quality.

I started with something I couldn’t really resist: pork belly bites with spiced butternut squash purée and apple sauce. 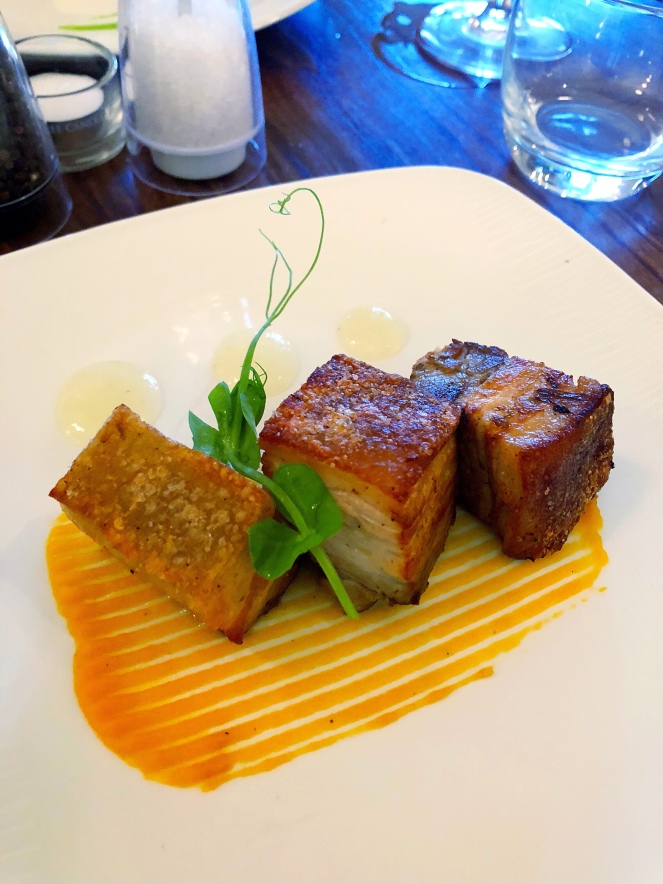 I was hoping for soft, fall apart meat with that sexy crackling top – I got the super tender meat but the crackling could have been slightly crispier, although it still had a little crunch. One thing you can dread with pork belly is that it’s too fatty, but no such problem here, it was meaty and full of flavour without being a bit flabby. The one thing that could have improved this starter is a bit more garnish. The spiced butternut squash purée was delicious but there wasn’t enough, same could be said for the sweet apple. On your third piece, you become aware of just how meat it is on its own, so a bit of salad to break up the richness would have been nice, too. Having said this, it’s still some of the most tender and flavourful pork belly I’ve eaten in a long time. 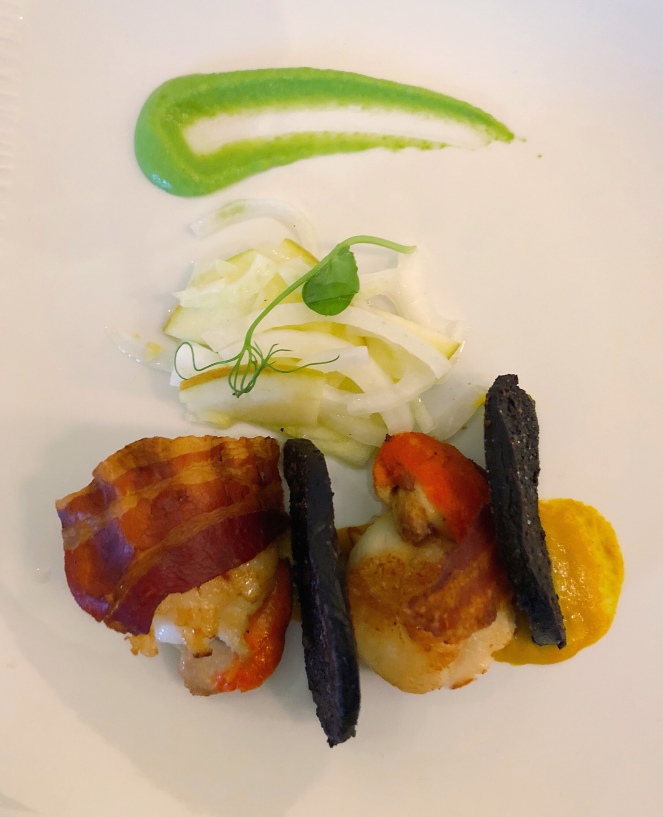 One thing to note is that it doesn’t state mustard as an ingredient on the menu, so I got a nasty shock trying Stu’s starter when I got a gob full of the one thing I don’t like! This is a real miss as I was very close to ordering it for myself and would have had to send it back. Mustard is an allergen, so also potentially dangerous not to put it in the dish description.

On to the good bits: literally everything else! The black pudding was so rich and beautifully spiced which complemented the delicate, fresh scallops. Not a new flavour combo but delicious and well executed all the same. The crispy pancetta added salty crunch and the pea purée was fresh and light with the zingy apple. We were so happy to see the scallop roe (the orange bit) served with it, restaurants remove it most of the time but it’s sooo flavourful, fishy and creamy in texture. This elevated the dish even further – a third scallop wouldn’t go a miss though!

For the main course, I ordered a fillet steak which comes with chips and a sauce, but it was no problem for me to swap the chips for a garden salad. I still got the peppercorn sauce!

The main courses came really quickly and looking fantastic – the presentation was great on all our dishes. 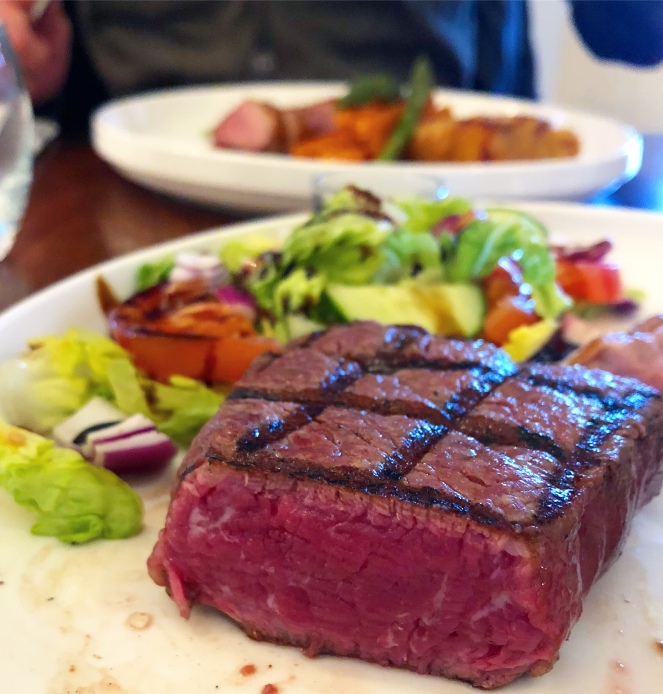 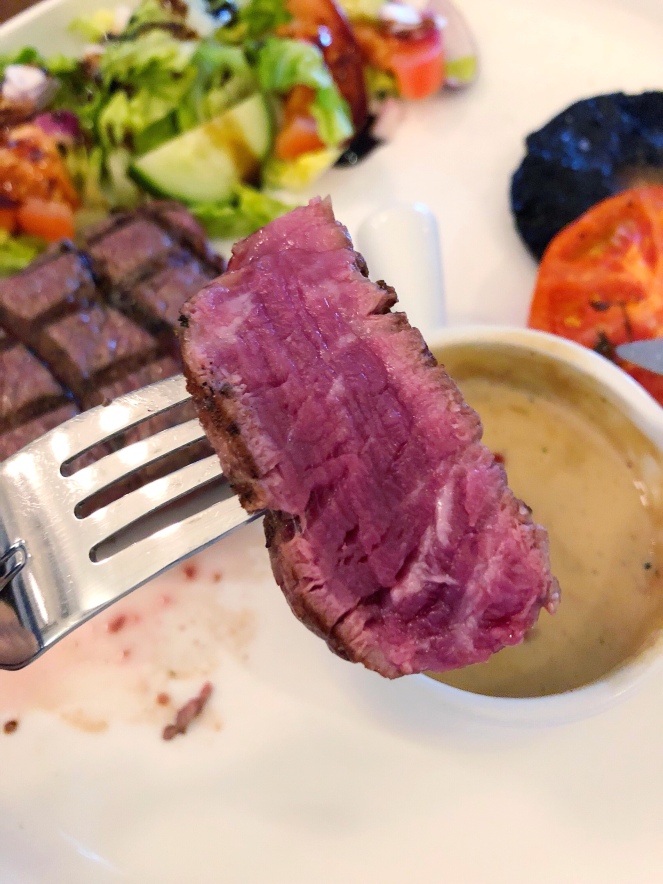 Now, the fillet steak is expensive, as it is most places. But if you like your steak, you’re going to bloody love this one. Locally and meticulously sourced from a farmer in Lowdam, it is one of the tastiest steak I’ve ever eaten and was the highlight of the meal. I always order fillet steak rare and It was veeeery rare indeed – but the cut was flavourful and tender enough to take it and it was still warm in the middle with a lovey char from the grill. No need for me to send it back. I don’t know why they bothered serving it with a steak knife because it was outrageously tender and cut like butter. The peppercorn sauce also had a delicious complexity to it, using pink peppercorns for a unique twist that adds more a citrusy, floral flavour profile that is delicious with the rich cream and butter. I had to resist drinking this from the jug when I finished my steak (ok I did a bit when no one was looking). The salad was a salad, it was never going to outshine the other two beautiful elements. I was also surprised at the size, I can’t believe it was 8oz as it just kept going! If you want to push the boat out, this is the way to do it – there’s no getting away from the fact that at £24, it’s not cheap. But, it is good value for what you get. They also do sirloin, t-bone and rump on the grill which are cheaper and I’m sure are equally as delicious.

Stu had the duck with dauphinois potato, seasonal veg, duck sauce and butternut squash purée (though he shamefully asked for it without, as BNS is one of the only things on Stu’s no-go list). 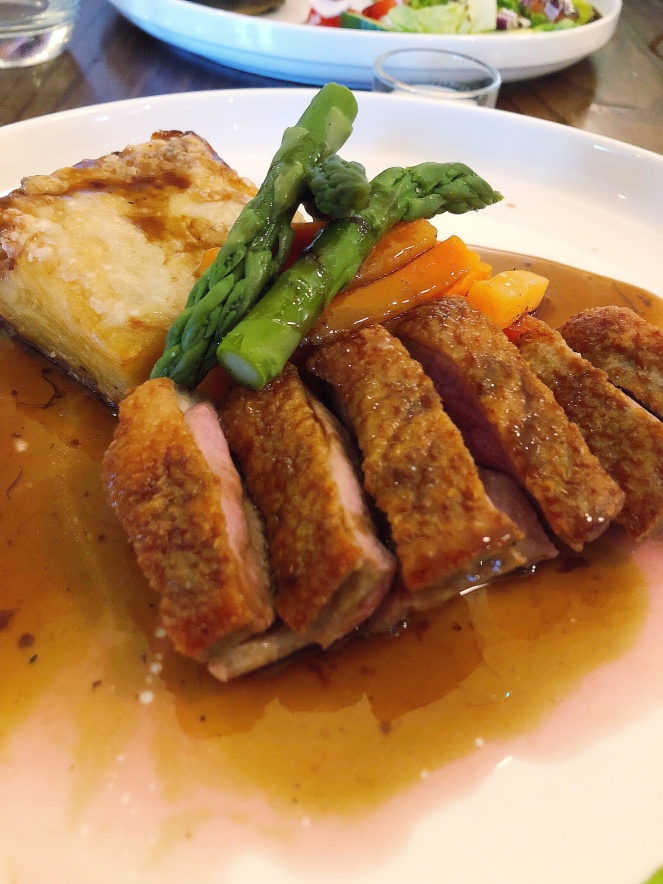 The duck was cooked really well, pink and rested so it was tender and flavourful. The seasonal veg were fine, the dauphinois was really well executed with a gorgeous crisp and flavour of thyme. The star was the sauce that pulled everything together in rich, salty, unctuous deliciousness. The only improvement would have been crispier skin on the duck breast. We’ll never know what it was like with the planned butternut squash purée but I bet I would have enjoyed the sweetness!

The portions aren’t overwhelmingly large here so we had some room for pudding. Remember when I said British favourites? Well then you can’t blame us for getting the sticky toffee pudding and the deconstructed lemon meringue pie – phwoar. 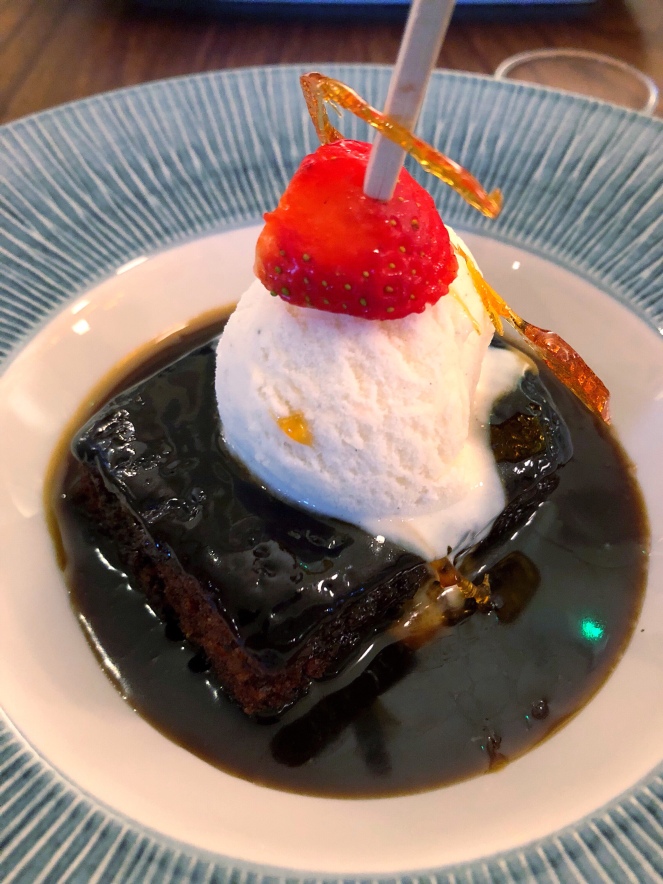 Sticky toffee pud is one of those things where the bad ones are bad but the good ones are pretty amazing. This one was gooood! The dark caramel sauce was salted which made all the difference, really adding depth to that rich toffee flavour. The sponge was moist yet light and the vanilla ice cream was the best there is. Fab. 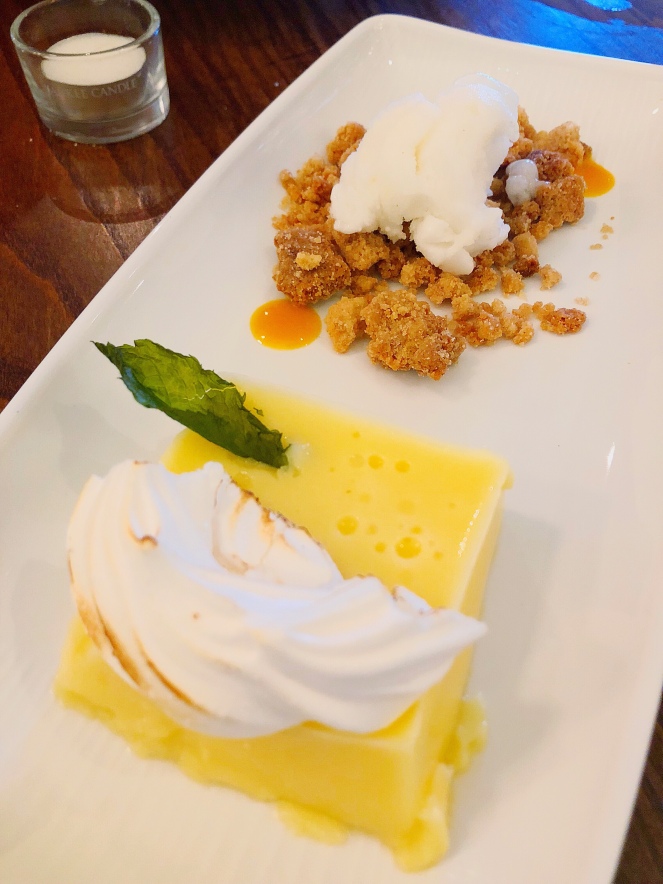 The lemon meringue wasn’t as tasty, at the risk of falling into style over substance cheffy traps, only ‘deconstruct’ something if it’s really going to enhance the dish, which it didn’t here. It didn’t benefit much, if anything it meant it lacked meringue – which was sadly not homemade but of the polystyrene-esque supermarket variety perched on top. The set lemon curd had a pleasing wobble, texture and lovely tartness. More sourness in the form of the accompanying lemon sorbet left me searching for the sweet and finding some but not enough in the biscuit crumb. A sweet vanilla ice cream and more than half a store-bought meringue nest would have balanced this much better.

So, overall The Tailor’s Arms seems a great addition to the area, we really enjoyed our meals, the drinks menu and the fantastic service. Highlights were that perfect fillet steak and a sticky toffee pud to die for, but the starters and duck dish were equally brilliant. It’s not cheap pub grub by any means, the chef has absolutely elevated the classics into something that bit more special so it’s just as fitting for a special occasion as it is a lovely yet relaxed Sunday lunch. Speaking of, we can’t wait to go back and try the epic looking roasts!