Yes, it’s happening. We’re jumping on the ol’ resolution bandwagon and trying to combat a December filled with far too many over indulgences. I’ve been following Weight Watchers for a while now (which means Stu pretty much has no choice but to as well!) and have still managed to lose a hefty amount of chub despite eating out a ridiculous amount. One thing I’ve learned through dieting AND food blogging? Eating out doesn’t have to be super calorific, there are tasty and healthy choices out there. So, in Jan we’re going to review a few different ‘healthy choice’ restaurants – and no, that doesn’t mean salad for the month.

Now, we’re by no means diet experts and there are lots of things that can contribute to a healthy, balanced lifestyle so don’t take what we say as any sort of advice. We’re just 2 foodies giving our opinion on where to eat if you fancy shifting a few of the 3498578 mince pies you’ve eaten over Christmas (if you’re anything like us!)

First on the list is Yo Sushi. Lean and packed with protein, the veggie and fish dishes on the famed conveyor belt of Japanese tapas (japas?) are often naturally lower in calories. What makes this EVEN BETTER is their January Sale Resolution menu: 47 dishes at the ‘blue plate’ price of £2.80. Value wise, this makes a HUGE difference to the bill, as we’ve found Yo to be a bit pricey in the past. At this price, we shared 10 dishes for under £30 and we were stuffed. This menu is also fantastic if you’re doing Veganuary or trying veggie as there’s a fab selection of suitable dishes available

Here’s a selection of our favourites:

This was my favourite dish of the evening, clocking in at the lowest calorie count of all. Ponzu is a delicious citrus-based dressing with soy, it lifts the seared tuna to tangy new heights. The tuna itself is lightly seared and wonderfully flavourful and tender. Served with crunchy mooli (japanese radish), this is a lean winner packed with flavour. We saved the sauce for dipping other dishes into!

Stu’s favourite dish was also a seared, sahimi-style plate. Pepper-seared rare steak strips swim in a pool of coriander pesto and mooli. I don’t know what exactly makes it coriander pesto but we’d love the recipe. With a squeeze of lime it adds a delicious herby, citrus kick to the lovely tender beef. This is on our list every time we visit and it doesn’t break the calorie bank for a hit of red meat. 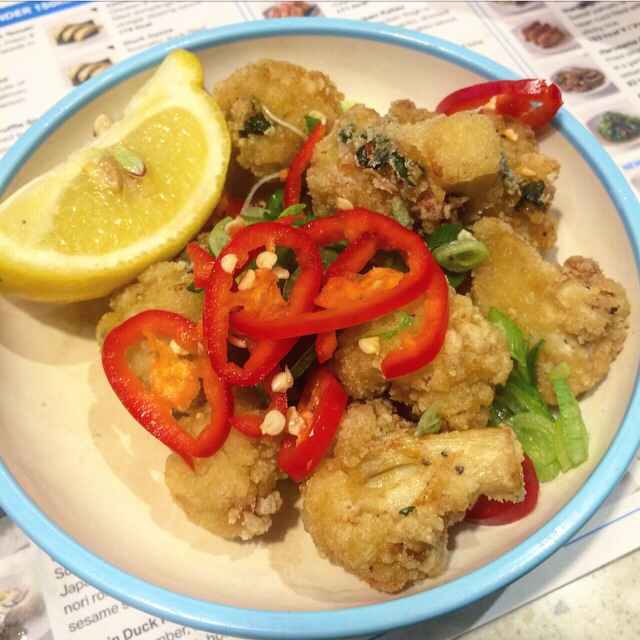 The spicy pepper cauliflower is essentially the veggie/vegan version of the popular YO dish spicy pepper squid – crunchy, tangy and HOT. We had both, though unfortunately our squid was more batter than squid and overcooked. I’ve had this dish at Yo before and it’s usually my favourite, with just a light batter and melt-in-your-mouth calamari. But, it wasn’t so this time – hopefully just a bad night at the fryer. Topped with lemon, spring onion and raw red chillis, this is a great dish with classic oriental flavours. Dip in the soy sauce and pickled ginger for extra yumminess. 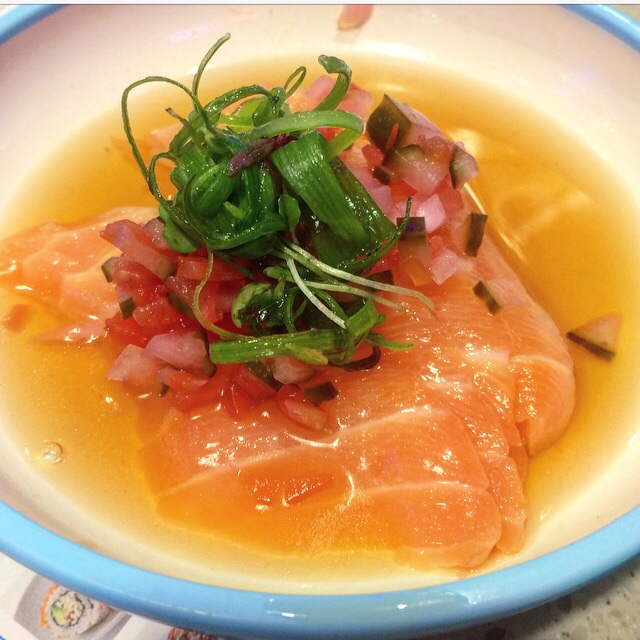 Yo also serve the salmon sashimi on its own, but the idea of a yuzu salsa just made it sound all the more interesting. The salmon tasted fresh, the yuzu salsa was citrussy and refreshing without completely drowning out the flavour of the delicate raw salmon. Having said that, I would have liked more flavour from the fish, though it was very soft and juicy. 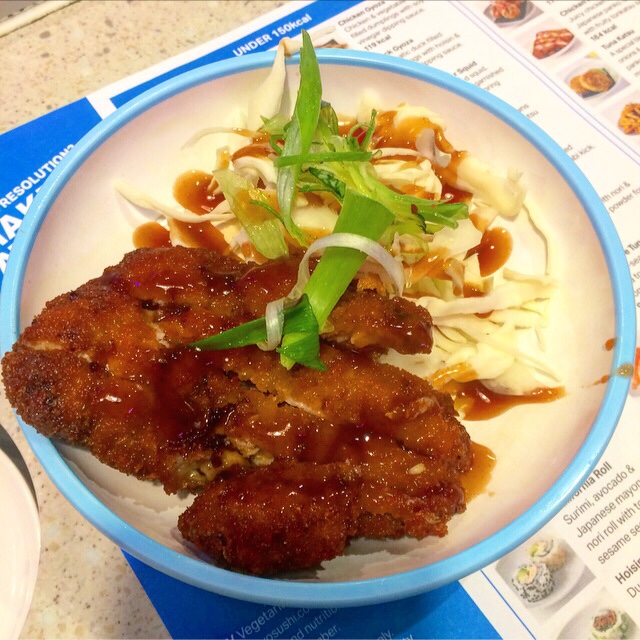 We went for the rice-free, lower calorie version of the chicken katsu curry which is the chicken on its own with a fruity tonkatsu drizzle. Although we did enjoy the crispy, moist chicken thigh, we did feel like we were missing out on the proper katsu curry sauce and would order the daddy dish next time. The chicken was well cooked and crunchy but the sauce was a little too sweet and the cabbage seemed to be there just to bulk out the dish – wasn’t very edible.

Some dishes we had but didn’t photograph:

Furikake fries – these chips are tossed in siracha mayo and sesame and they were amazing, really tasty indeed (if a bit naughtier, health wise). Order these fresh rather than taking them from the belt so you get them hot.

All in all, Yo Sushi seems to be a great option for some healthier dishes for both meat eaters and veggie/vegans, especially at this time of year when their January Sale menu makes 47 dishes only £2.80. Much more affordable than normal. The service wasn’t amazing because it was very busy, one dish we ordered never arrived and we waited 20 minutes for the spicy pepper cauliflower, but we were still in and out in 45/60 mins. It isn’t the most relaxing or special environment, so I would keep Yo for those casual pre-cinema dinners or a light lunch. Definitely go for the tuna and the beef, pray the squid is good on your visit!

One thought on “Healthy January: Yo Sushi, Nottingham City Centre”