We recently met with a couple of mates for lunch and, with one being vegan, we had to think a little harder about where to eat with a range of options. Although we’re aware of Nottingham’s fairly good reputation for such inclusivity, honestly we’ve never had to consider finding anywhere with a balanced amount of vegan and meaty options. Eventually, we had that forehead-smacking moment of “Duh! Oscar and Rosie‘s!” Their entire meat-eaters’ pizza menu is recreated with vegan alternatives, so it’s super veggie and vegan friendly with lots to choose from (if you like pizza!)

O&R’s have recently moved from their previous premises on Thurland Street and relocated to Stoney Street, facing the Angel pub. The new place is much bigger and brighter, they even have plans to add seating upstairs and an outside eating area. Gladly, the one thing that doesn’t appear to have changed is the menu, which offers a large range of innovative and classic pizzas, a similarly sized vegan pizza menu, salads, sides and a pimped up mac ‘n’ cheese menu (God, how I hate that ‘n’).

I decided to go for the L’Homme Francais pizza which has goat’s cheese and beetroot on a garlic butter base. I went for this as I love a goat’s cheese and beetroot combo and it sounded like something I had never eaten before (after ordering, Emily usefully informed that this is exactly what I ordered last time – a benefit of getting old is that every meal feels like your first meal).

Emily showed almost superhuman willpower in the face of delicious pies being served all around her and ordered an outrageously healthy Serrano ham salad. Our vegan friend ordered the Boom Chik-ish Waa Waa pizza which is topped with ‘chicken’, fakon (fake bacon), caramelised red onion, mushroom and tomato sauce. Our other mate ordered the Checkpoint pizza, topped with butternut squash roasted in cumin and chilli, award winning smoky bacon and sage on a tomato base. The 14inch pizzas were all £14 with a smaller £7 lunch option (for wimps) and the salad was £7.

The food arrived in good time and looked fab, so we tucked in.

The L’homme Francais pizza was amazing – I love the flavour of goat’s cheese and the creamy saltiness worked really well with the sweetness of the beetroot – a very good combination. I would have liked more garlic punch in the sauce, but I am a garlic monster. The trick to a good pizza, and Meghan Trainor will agree with this: it’s all about that base. Bad bases are either a floppy, doughy mess or too dry and crunchy without that stonebaked char flavour. It doesn’t matter how good your toppings are if the base is crap, luckily Oscar & Rosie know their way around a pizza dough or two, serving up thin, crisp and beautifully baked bread. Emily’s salad was ok as far as salads go – the ham was delicious, plentiful and really fresh but the leafy base wasn’t very inspiring. A few leaves, one slice of pepper and cherry toms does not an exciting salad make. Emily had the dressing on the side after discovering it contained mustard, which she doesn’t like. After a little taste it wasn’t actually that mustardy at all, more smoky with paprika which went well with the ham. She definitely had pizza envy but probably consumed 1200 less calories than me!

Our stoic vegan friend declared his pizza as being ‘dead good’ with no further insight shared, but it was both Instagrammed and polished off in record time with a big grin, despite a disappointing lack of vegan mayo for the crusts. 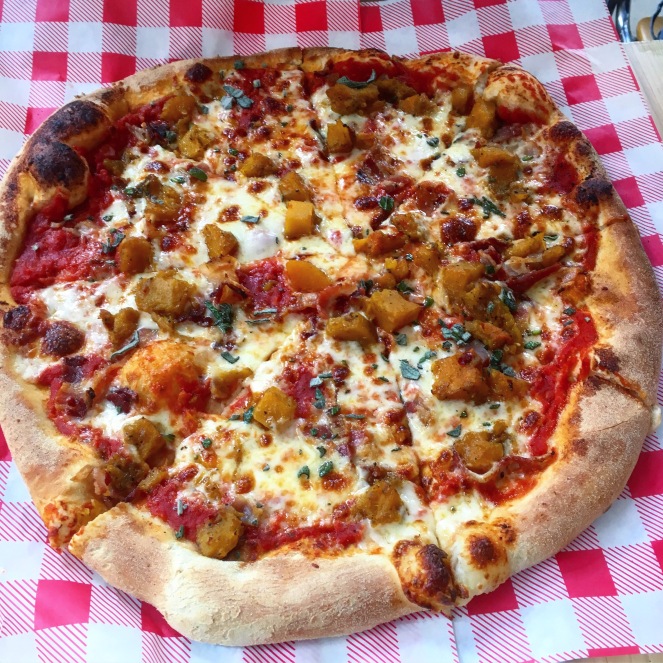 Our other mate also declared his pizza to be a success. He appreciated the fact that the butternut squash had been roasted to a beautiful softness in cumin and chilli, adding an almost Indian-like flavour profile. He could detect both spices and they both worked well with classic bedfellow sage and the tomato sauce. It was at this point we had to tell him to pipe down and remind him who the food bloggers are.

So, overall we all really enjoyed our lunch and you can’t beat Oscar & Rosie’s for a fantastic sit-down pizza experience in Nottingham, especially considering how hot they are on dietary requirements. We had a fantastic pizza at Inferno recently for roughly half the price, but they are an entirely different proposition: Inferno is fast food and Oscar & Rosie’s offers a more upmarket restaurant experience – it’s such a great place to bring friends or grab a casual lunch. Plus, their interesting combination of toppings are so unique, from the tinned peaches on the Cosmopolitan pizza to the pesto base on The Frenchman, there’s always something different to discover. There weren’t any pizzas on the menu that we weren’t tempted by and we definitely want to go back to try some more – Emily will for sure have a pizza next time! A big thumbs up from us – check it out.