Outpost are making a name for themselves in Nottingham for their outstanding coffee, so when we were invited to try out their recently launched brunch menu we were there with knobs on.

The shop is small but comfortable with achingly cool decor – you can easily relax the day away reading their plethora of coffee table books and magazines. 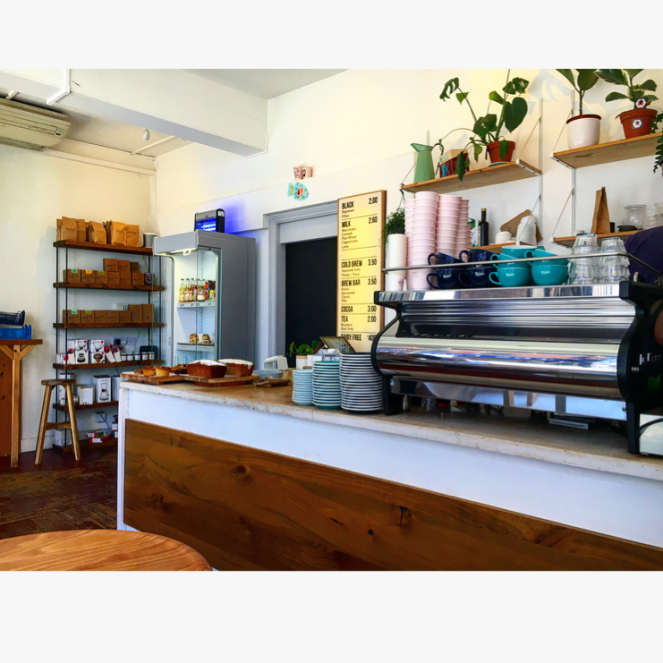 The staff soon made us feel at home and handed us the small but perfectly formed brunch menu, the options were a kimchi and cheese toasted sandwich, a smoked salmon and cream cheese bagel or French toast with strawberries mint and maple syrup (nice to have a sweet option thrown in, you should have seen Emily’s agony in having to choose between sweet or savoury). They also had an incredible array of homemade cakes and bakes on the counter. My eyes were immediately drawn to the Kim-cheese toastie. I was at once both excited and astonished that I haven’t tried this combo before; 2 of my fave foods, kimchi and cheese, brought together at last. Emily ordered the bagel with cream cheese and salmon and we both ordered a cold brew iced latte, leaving the French toast for another day.

I’m a relatively new convert to iced coffee though Emily has loved them for ages – when it’s good it’s amazing, but it can easily turn into a sickly sweet glass of milk with no hint of coffee. Thankfully, we always had faith that Outpost know their shit when it comes to coffee and our iced latte was fantastic – just the right amount of sweetness and creaminess while still retaining the flavour of a superior coffee blend. Perfect! The food arrived and, with the cool surroundings and our cut latte glasses the whole thing looked so ridiculously Instagrammable. The smell was insane and I couldn’t wait to tuck into the sarnie.

The oozy, melty cheddar combined with the sharp, tangy kimchi worked so well. If you’re not familiar with kimchi, it’s a Korean fermented cabbage. Along with pickling liquor and spice, it’s chucked in a jar and left to ferment and mature into this incredible, funky, spicy, tangy side dish that adds life to literally any dish – it’s great stuff. Combine this with rich, creamy cheese and you’ve made an awesome marriage of flavours with an oriental twist. It was toasted in fresh bread from Tough Mary’s Bakehouse (Derby Road) which was also brilliant. Although a simple dish, it was so well thought out and lovingly prepared with the best ingredients. It really doesn’t get much better than that.

Emily’s bagel was also very well made indeed. The bagel was also from Tough Mary’s and tasted fresh and springy with a nice salty seasoning on top. The star of the show was rightly the salmon, it was just so incredibly fresh and of outstanding quality, plus there was plenty of it. It had no hint of that oily, plasticy texture that you can get from older or cheaper suppliers and was such a joy. It was topped with light and refreshing cucumber ribbons that were lightly marinated (much preferred to the standard cucumber slices). Combined with a thick schmear of the creamiest cream cheese this was a fantastic brunch on par with the bagels we enjoyed in New York (a huge compliment!) A squeeze of lemon would have lifted this further.

So, overall we really enjoyed it all and will definitely return. It’s such a nice place to come and enjoy a morning, watching Hockley go by with great local produce and delicious coffee. The menu is very limited to 3 options (probably due to the small kitchen space) but hopefully once they’ve proved brunch works for them, they can add a few more gems. Then again, I can’t see myself ordering anything other than the kim-cheese again. For around £6 for a light dish, it’s not the cheapest brunch in town but definitely worth the few extra pennies. Top drawer, going on our list of must-try brunches and local Nottingham heroes.