We first visited Son of Steak in their opening week after seeing a load of social buzz that piqued our curiosity. Son of Steak is a Mitchell & Butler restaurant, who also own the Harvester that it replaced in Trinity Square. Our foodie-snobbiness usually restricts us from liking most chain eateries (pass the artisan sourdough, daahhling) but this one-off proof of concept store is at least trying something a bit different, appearing like a steaky version of Nando’s with a cooler edge – they serve steaks on wooden blocks to prove it. They even have that whole ‘order it ya goddamn self and collect your own bloody cutlery’ system.

After shouting about their signature flat iron steak as ‘the best cut you’ve never tried’ our excitement upon arrival turned to confusion, disappointment (and amusement!) to learn that they… didn’t have any. Son of Steak had run out of steak! We were astounded haha! We didn’t go hungry though – we had to go for the alternative josper steak (though irritated that it was an upsell). The josper is pretty much a fancy grill that imparts a BBQ char flavour and the cut of the josperised steaks are much chunkier than the flat iron. 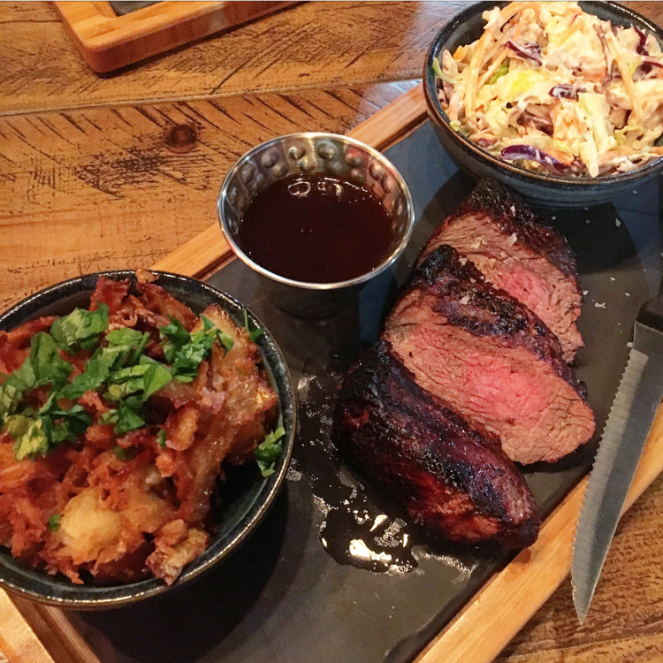 We both ordered rare but they came cooked wildly differently, Emily’s was sent back because it was on its way to well done – you can’t say you specialise in steak and then not bloody cook it right, c’mon! It was also considerably smaller than mine and was a bit… shrivelled and dry. The replacement steak took over ten minutes to arrive, by which time all the side dishes were cold and I had already finished. So poor Em got to hack at the now underdone replacement steak on her own – the chef had over compensated by serving it practically still mooing. Bollocks if we were going to send it back again though, by this time she would have eaten her own foot she was so hungry (and if you have ever seen Emily’s feet you’ll understand what a bold claim that is). There was no apology and, because we’d already paid upfront with the stupid Nando’s order-at-the-till system, we couldn’t be compensated on the bill.

The sides: All the steaks are priced individually with sides sold separately. The flat iron sells at £6.50 for 6oz and £7.20 for 8oz. It sounds reasonable, but this price doesn’t include sauce or sides (which you’ll be needing). The sauces are £1 each and the standard sides are £2.25 each or 2 for £3 with some gourmet options for slightly more.

We ordered skin-on fries (fine), coleslaw (average), raw salad with ginger dressing (too sweet), sweet potato mash with maple and pecan (tasty) and onion loaf (the best thing in the world). Onion-loaf may be the best thing that’s ever happened to side dishes. It’s sweet yet savoury, soft yet crispy and just totally YES! For sauce, we had the amazing beef dripping gravy and the wholly disgusting chimichurri. 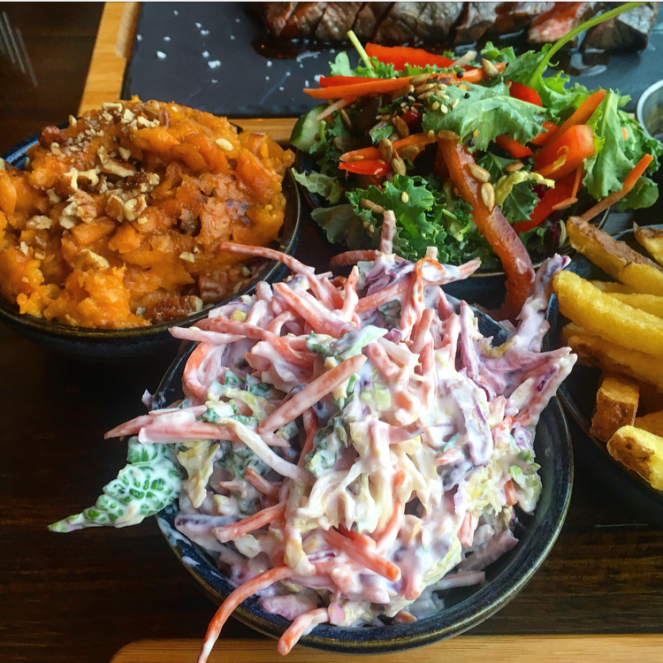 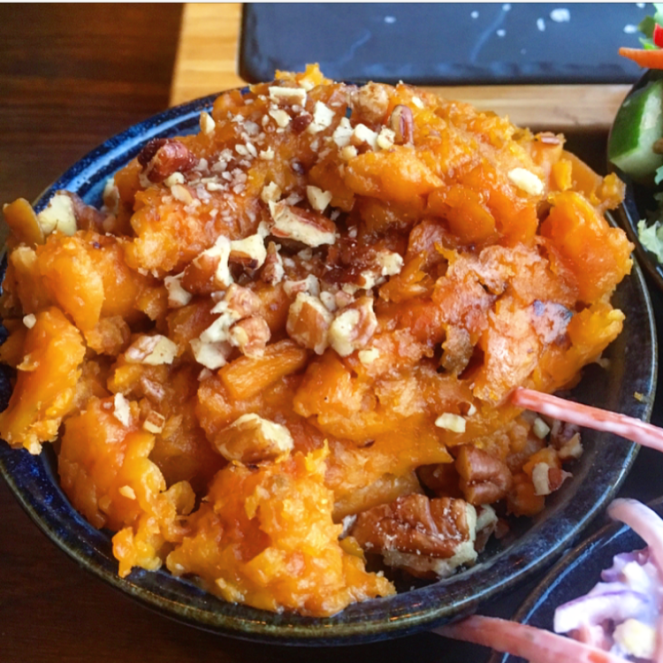 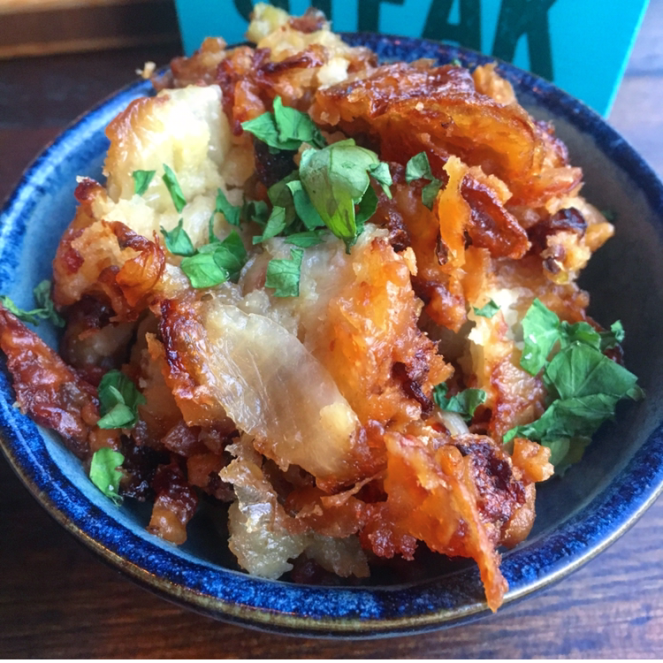 I know we’ve not been very positive but there were some highlights, to be fair. The josper grill definitely adds superior flavour to the steak and when it’s cooked well it is very nice and tender with a lovely smokiness. The sides were hit and miss but we would go for the onion loaf alone. The beef dripping gravy sauce and their bottled steak sauce is also absolutely delicious. But Jesus, get the service and cooking side right.

After a pretty dismal first visit, we were invited to return to test their legendary flat iron steak by way of an apology, which we happily accepted.

We ordered two 8oz flat irons with a beef dripping, chips, onion loaf, house slaw, crushed sweet potato and the raw salad (as opposed to the cooked salad that we all know and love!) 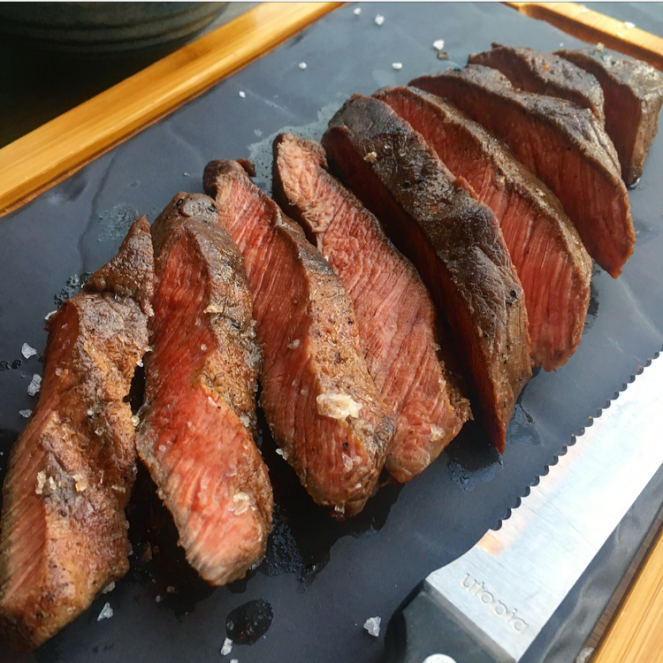 First off, the steaks were actually very tasty. We have eaten a lot of steak, from the tenderest fillet to leathery rumps and this flat iron was a good’un. It’s not as tender as a fillet or as flavourful as sirloin but it sits ambitiously somewhere better than a rump with plenty of flavour and it wasn’t fatty at all. However good the steak tastes, its flavour is enhanced dramatically when you add that meaty beef dripping gravy. Emily (AKA The Gravy Monster) was once again loving it and I had to wrestle the pot from her hand to get a look in.

We also tried the steak bao but, at £8.60 for two, the tiny sliver of undercooked beef in each just didn’t justify the price. Although some of the flavours were ok (but they did just chuck the raw salad side on there), the whole thing was stone cold and the steamed bun didn’t taste fresh. Meh. 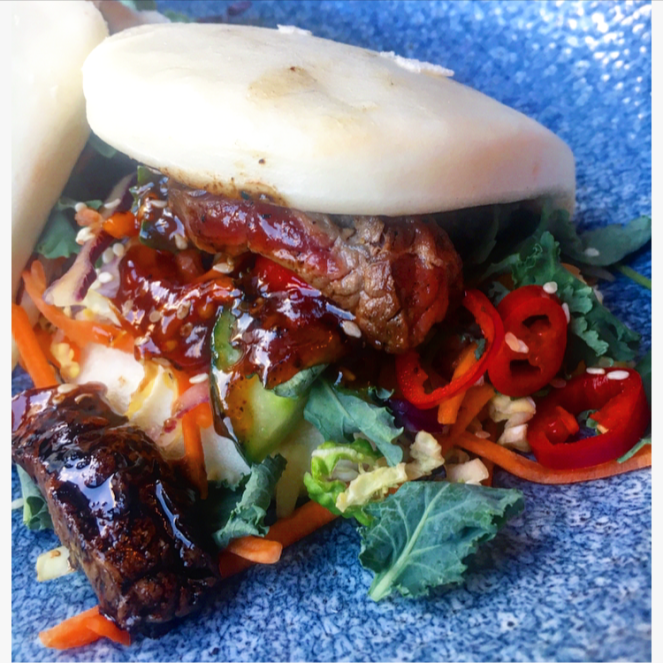 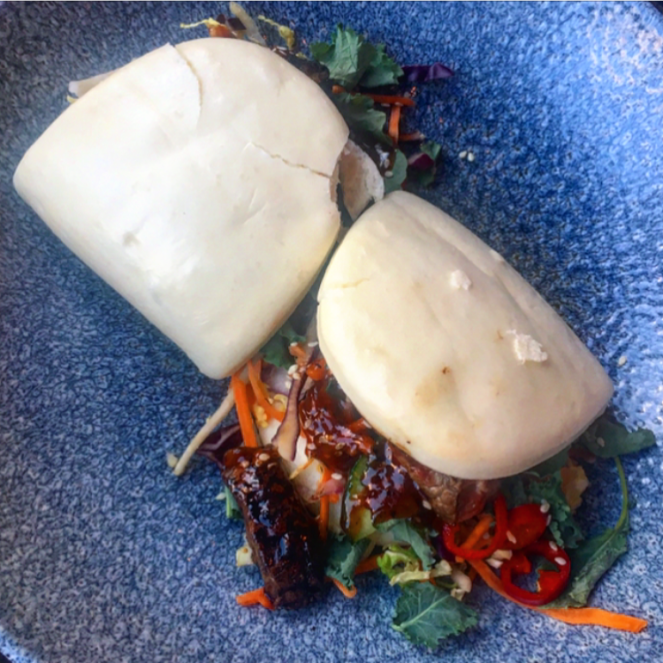 So a mixed bag, right? Hopefully any new-restaurant teething problems have been resolved, I don’t think we’ll be going back though. This might be a good family place or a meaty meet-up with the ladz. It hasn’t made our list of top date night venues, but as somewhere you can get a good feed at an ok price it’s alright. Not setting the Nottingham food scene on fire, unfortunately.