Having moved to the castle side of Nottingham, there’s a new host of restaurants in walking distance that we might not have ventured over to before. One these rediscovered gems is the Roundhouse. We popped in for the Sunday lunch menu, immediately taken aback with how busy it was – which has to be a good sign. We were hopeful of getting a good feed but we’re wary after a run of bad Sunday roasts recently.

I opted for the roast chicken Sunday lunch while Emily (who has never been swayed from a roast before) was tempted by a healthier option of rustic seafood chowder. At £12.95 for the chicken and £13.95 for the beef, the roast was a couple of quid more expensive than some city centre neighbours so our expectations were high.

We unfortunately got our order in just after a huge 60th birthday party so the food did take a while to arrive. When it did come, both dishes looked mightily impressive and inviting.

The roast was a good size and the meaty gravy smell got my mouth watering.

I immediately tucked into the chicken and was relieved to find it was tender and moist with a great flavour. It was well seasoned  and soft with a crispy skin, just how you hope it would be (but rarely is). The gravy was very rich and added a deep, meaty flavour to every bite. The disc of sage and onion stuffing was the perfect consistency and again worked really well with the meat. So far so good, so I tried the all-important roast potato. And, I’m glad to report, it was also really good. Too often roasties are rock hard on the outside and bland but The Roundhouse did a great job.  The fresh, perfectly cooked Yorkshire pudding did a stellar job of soaking up the gravy and the veg accompaniment of carrot, cauliflower and cabbage was well cooked and tasty. If you can’t tell yet, I really rated this roast. Best one in ages!

Emily’s seafood chowder was delicious, too. 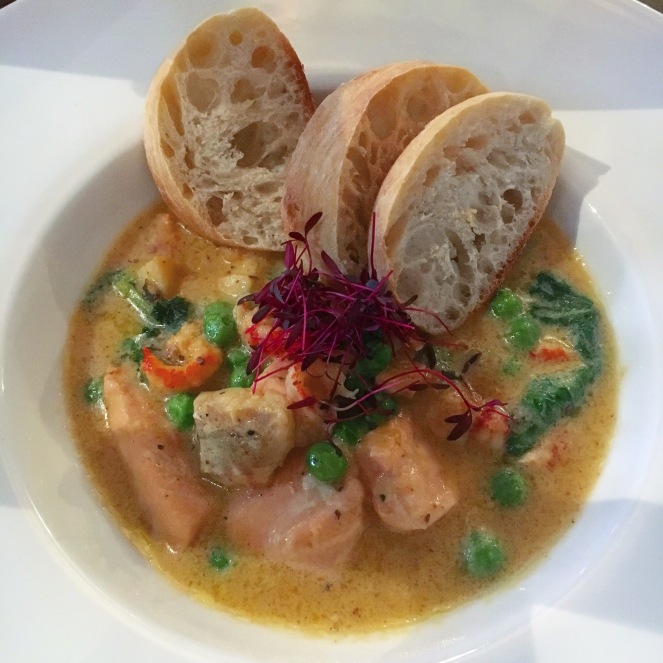 It was such a lovely light version of what can be a very thick and heavy winter dish. Perfectly poached chunks of salmon and cod swam with peas, crayfish tails and wilted kale in a beautifully flavourful potato broth. I say broth rather than soup as it was very light yet still comforting and buttery, allowing the lovely fresh seafood to shine. It was beautifully presented with micro herbs and ciabatta, which would have been better toasted with butter.

This was a really enjoyable dish but not particularly large which made the £12.95 price tag a little steep. We have actually tried to recreate this one in our own kitchen as it was so yummy but our attempt was nowhere near as good!

The Roundhouse is currently at the top spot of our Nottingham roast leaderboard, it was great. We’ve only visited once so can’t yet vouch for their consistency, but I’m already working out when we can visit again to try the roast beef. This is a great family place with cosy, traditional decor and good beers to boot. For me it’s a triumph all (Sun)day long.

One thought on “The Roundhouse, Nottingham ”