We’ve tried a lot of Sunday lunches in the city centre. As always, we were on the look out for something better than we can cook at home – the ‘sharing platter’ on the Ned Ludd’s Sunday menu caught our eye as an interesting twist.

Oddly, when we arrived we were told to wait ten minutes until they opened the upstairs dining room, a space we didn’t know existed. It’s nice and quiet up there, if a little lacking in atmosphere and we were made to feel awkward as they shuffled all the tables around us. We ordered the roast chicken platter for two. 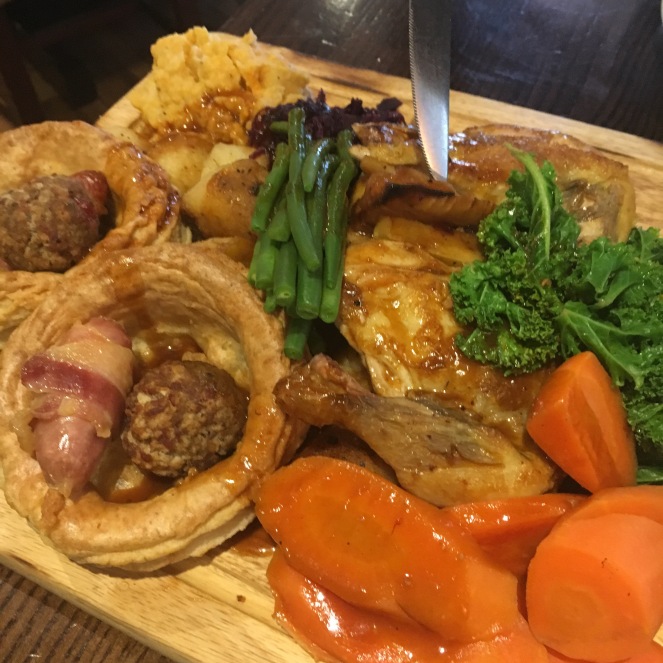 Although our eyes widened at the the bountiful platter and the good selection of veg, the fun unfortunately ended there. Over the year we’ve been running this blog, we’ve found to our surprise that a restaurants ability to cook chicken well has proven an accurate indicator of overall quality – if the chicken is great, chances are you’re on to a good’un.  Although relatively simple in technique, to keep chicken moist and truly delectable seems to be a challenge for a lot of kitchens due to the small margin of error – a few minutes over and it’s dry as a boot. Some restaurants do a fab job, Ned Ludd is not one of them.

A steak knife would have been appreciated to get through the tough chicken breast. The leg was slightly better but, being rather small and shrunken through over cooking, there wasn’t a lot to go between the two of us. Add that to the bland taste and rubbery skin and we were quickly wishing we had gone elsewhere. The chicken was an absolute fail – you have to get the meat right, it’s the best bit!

Usually a nice surprise to have a pig in blanket outside of the festive season, our excitement was short lived as the sausage was clearly of poor quality. Over salty with a weird, thick skin and flabby bacon, a treat this was not. The Yorkshire pudding didn’t taste fresh and the box-mix stuffing was just ok – nothing special. It added some flavour to what we’ll call the ‘sawdust chicken’ but we’re digging deep for compliments here. The veg was, again, just ok. Boiled and bland with the roast potatoes just making a salvageable plate. The mashed ‘something’ had a strange taste, we decided it was swede but can’t be sure.

As you can tell, we clearly weren’t impressed. It was affordable at £16.95 between the two of us but we would rather pay more for something closer to edible. We left a lot of it and scarpered home for a cheer-up pudding and a glass of wine on the sofa. Sorry Ned Ludd, you’ve got to improve a lot to match up to the roast offering in Notts. We don’t take writing bad reviews lightly and usually finding something good to say but it didn’t happen for us this time.

Sunday roasts we do recommend: