In a giddy state after booking a get-away to Bali, we decided to stay on our holiday-high and go for some celebratory Indonesian food. Nada Budaya serve traditional Malaysian dishes as well as some other Indonesian classics and seems to stand alone in the city centre as specialising in cuisine from this part of the world.

You’d be forgiven for not knowing where Nada Budaya is as it’s tucked away underneath the Brewdog in Hockley – this might have accounted for how quiet it was. It is, however, a fantastic excuse to go for a cheeky bevvy before your meal.

We ate from the early bird set menu which goes for £12.50 for two courses and £15 for three. By showing a Facebook promotion, we also got a further £2 off. It’s worth doing your research, people.

The waiter was friendly and helpful, advising us on some of the more unfamiliar dishes while we sipped a pint of Singha beer. I went for the chicken satay to start and the beef rendang for main while Stu opted for dhal with roti followed by the Kway Teow (a fried noodle dish).

The starters were both shareable so we popped them in the middle of the table and got stuck in. 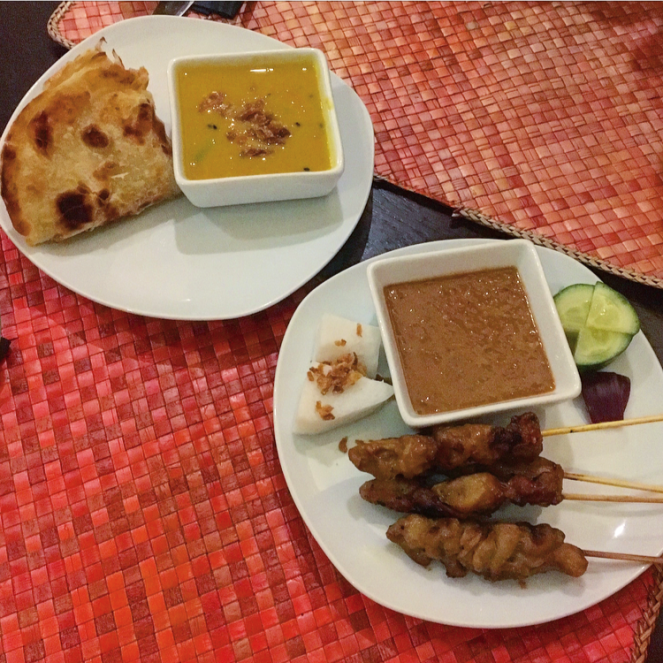 Both dishes were really tasty – the chicken satay in particular was delicious, with a generous amount of spicy peanut sauce to coat the succulent and flavourful grilled chicken skewers. The dahl was also enjoyable if a little thin, with more of a curry-like flavour profile – the roti also made a nice change from naan.

When the beef rendang arrived, I was a little taken aback as it wasn’t what I was expecting. A Google search for ‘authentic traditional beef rendang’ quickly informed me that a Thai green curry-like version I had tried before was very far removed from the real deal. Rather than chunks of beef in a coconut curry sauce, traditional rendang is drier, more like slow-cooked, braised beef with aromatic chilli and lemongrass. 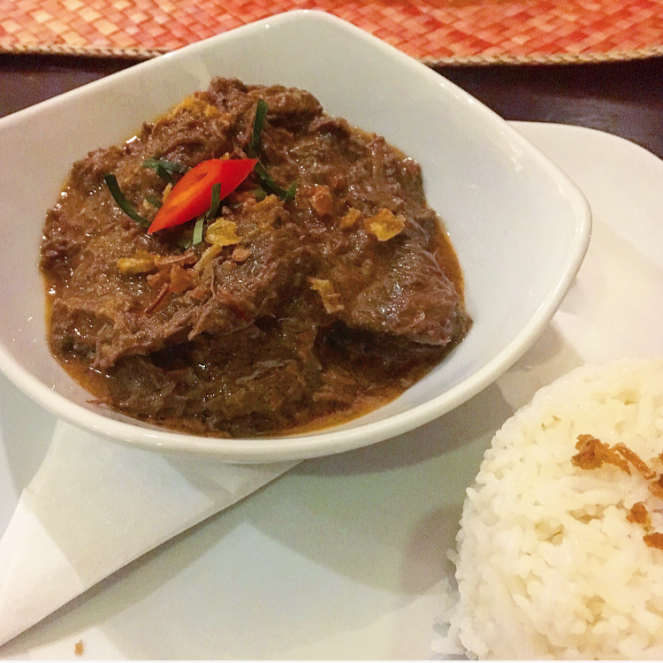 Served with rice, this made for a delicious, meaty meal. The beef fell apart and the heat from the chilli was just right – good if you like it spicy. I’m not sure I would order it again, but that is because I wasn’t entirely sure what I had ordered!

Stu’s noodle dish was enjoyed, the soy-based sauce was very spicy and flavourful and the chicken was delicious. However, it was a bit on the sloppy side and would have benefitted from being served al dente with more of a crunch. Stu also had to have a break half way through to slowly sip tap water as he couldn’t hack the heat! I laughed. Probably not a dish we would re-order.

The portion sizes were on the generous side so we were too full up for dessert, but we certainly enjoyed being gastronomically transported to Malaysia for the night. There’s one thing you can guarantee it’s that the dishes are all authentic and made in the traditional way – there’s no soft touch here for delicate British bellies and you’ll get a proper taste of the exotic at great value. We would definitely come back and would recommend Nada Budaya if you’re in the mood for a curry but want something a little different.