The site where Boozy Bones sits seems to change on a fairly regular basis; having been home to 3 restaurants within the last 4 years (I think), there’s something new to discover more often than you might think – you may remember the spot as the original Red Hot Buffet Shack, Rakonto Grill or Jim’s Smokehouse, which beat the likes of Rub and Red’s to be the first of many American BBQ restaurants in our fair city. We had visited Jim’s before and found the food to be good but the location never seemed to get the much needed footfall. We do remember the smoked BBQ chicken as being tasty (If you must know we rated Jim’s just below Red’s but way above Rub).

So, after a refurb it has re-opened as Boozy Bones, a self-proclaimed cocktail and street food bar. It’s interesting that the owners are trying to establish this as a bar rather than a restaurant – obviously hoping there are more profits in cocktails and a bar-led environment than purely a restaurant. We were invited to attend the launch event to try a cocktail and sample their menu, eager to see a transformation.

The first thing that we noticed about the restaurant was the peculiar mismatch/urban decor. It is very similar to  Jim’s but with random ornaments and oddities placed around. It struck me that they aspire to be like Curious Manor but, although interesting, haven’t quite pulled it off. There is some rather attention-grabbing and interesting graffiti around the place, including on the outside window – this is the creative quarter, after all.

Once seated, we perused the menu which Emily found great delight in identifying the many typos and grammatical errors. At this point, we were also a bit perplexed in what the menu offered: the sign outside said street food, but most of what was on offer here was American BBQ and burgers (advertised as being so big they can only be eaten with a knife and fork – I don’t think you can do that on the street). Street Food this was not. If anything, this is the mostly the same food as old Jim’s – they haven’t decided to ditch the American BBQ fad that became a Nottingham epidemic a couple of years ago. They had some food that would pass as street food (tacos and the like) but it definitely was not as different as expected. Nevermind though, we knew the chicken here was usually good so we both ordered Kansas chicken served with coleslaw and skin-on fries. I asked for an upgrade to cheesy fries, while Emily went for the cheesy, chilli fries. We also ordered a couple of cocktails, I went for a Basil Bramble and Emily opted for a Planter’s Punch.

Both drinks were lovely. My gin bramble was infused with basil and raspberry which really worked with the gin and made for a great sip. This is a unique combination we hadn’t had the opportunity to try before and it was really good – we want to know how to make this one at home. Emily’s cocktail was a Boozy Bones take on a dark and stormy with spiced rum, cassis and vanilla. Sweet but very, very nice.

Our chickens arrived shortly after, looking and smelling delicious. The chef was definitely generous judging by the size of the chicken so we were dying to get stuck in.

The chicken was in three pieces: a wing, breast and thigh/drumstick. The menu states it is slow-smoked over wood and then dipped in Kansas BBQ sauce before being finished on the grill and topped with spring onion and chilli pepper. The smokiness was nicely prominent, which I appreciated as often I bemoan BBQ chicken to taste bland and a slick of BBQ sauce doesn’t always make up for it – this chicken tasted much more like it. The BBQ sauce that was there was also very tasty and worked well with the smokiness of the meat. Emily did make a good comment that she would appreciate some of the BBQ sauces in a bottle so we could top it up and dip in a variety of condiments (like at Red’s). This would have helped to moisten up the chicken a bit too as, although the flavour was good, it was considerably dry as it cooled, unfortunately. My fries were also good – as I’m sure I’ve bored you with in the past skin-on fries are the daddy in my book and can’t be topped (except with cheese which was also welcome). Emily’s fries were also topped with cheese but she added chilli too. This was a veggie bean chilli and was tasty enough but not sure we would order this again – with the large chicken, normal fries would have been plenty. 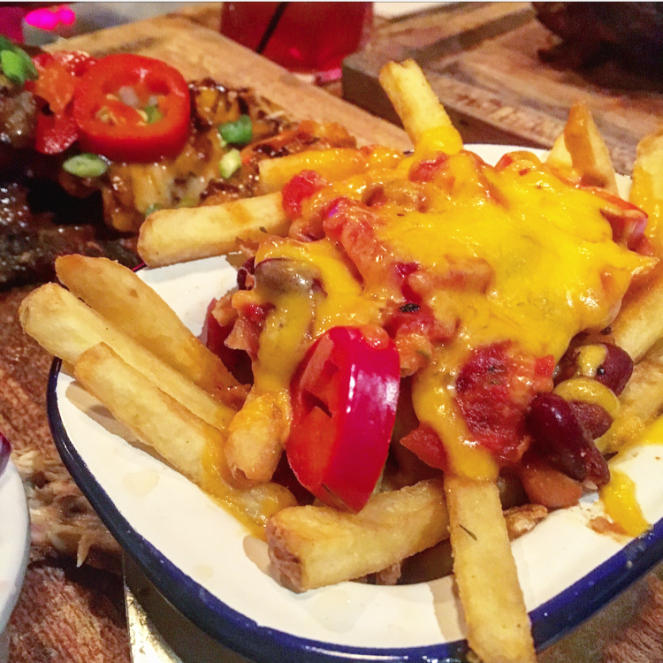 A big shout out must go to the coleslaw – it was amazing. As food fans, we have eaten much coleslaw over the years and this was one of the best. It’s amazing how just a few combined ingredients can be ambysmal or amazing. Boozy Bones’ coleslaw is fresh and crunchy with just the right amount of tang – a slice of gherkin was also added which was great. I would’ve loved more of it but then I’m greedy.

So, overall we loved the cocktails, enjoyed the food and probably will go back at some point to try more of it. We just couldn’t stop thinking that the concept of the bar was not clear and it’s a bit of a reskin of the old Jim’s. I imagine that the management (who also owned Jim’s previously) fully intended to re-invent the bar as a street food and cocktail joint, but then realised that there was a big smoker stuck in the kitchen that they may as well make use of so reverted back to being a BBQ place. I can’t blame them for doing this, but we feel they have to consider why Jim’s closed down and try and differentiate themselves in ways other than adding a stronger emphasis on the bar element. We really hope it works out for them and recommend people check it out.