We were recently invited to attend the opening of the new American restaurant Red Dog Saloon, but after waiting in a non-moving queue in the cold for 20 minutes and noticing that the swell of people inside didn’t actually have anything to eat, we decided to sack it off in favour of a quick chicken wing session at Bunk.

After a quick peruse of the menu we decided to share 20 wings with a side of fries and celery with blue cheese dip. Bunk offers a large range of wing seasoning ranging from plain to the ultra hot Naga viper chilli sauce. We were allowed 2 types of coating so decided to go for ten wings covered with buffalo sauce with parmesan (after getting a real taste for them in New York) and for the other ten we opted for garlic and rosemary. As mentioned in a previous review I’m a sucker for anything with this flavour combo so convinced Emily to opt for them, after all I am very rarely wrong in such matters.

Anyway, I was wrong. The rosemary and garlic flavours were too slight to even notice. When I make roast potatoes I smother them in rosemary and garlic which have been met in the past with great acclaim*, so was disappointed that these wings had barely heard a rumour of this flavour. This left us with 10 oily chicken wings in need of a bowl of Frank’s hot sauce to dip them in. I enquired if Emily had any on her person, but yet again she came out on date night unprepared. We made do with the blue cheese dip and ketchup but neither really cut the mustard (mmm, now mustard would’ve made a good substitute).

The buffalo wings meanwhile were hot and soooo tasty. 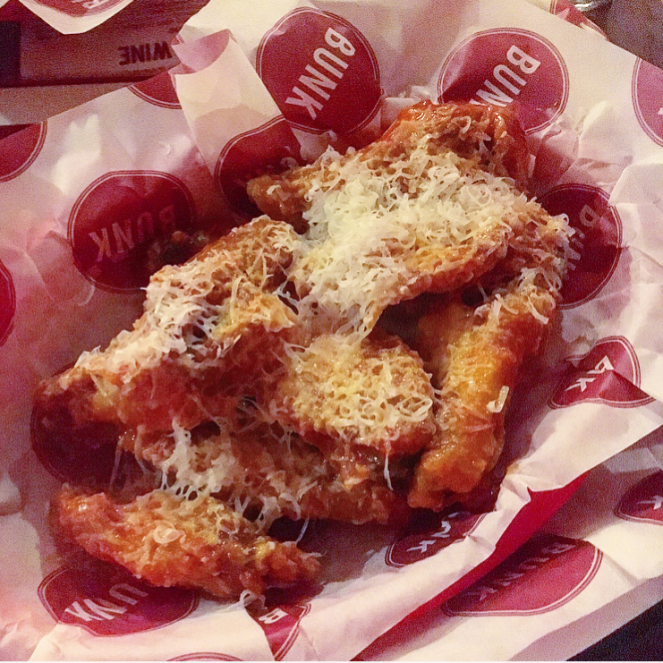 In New York, we found a lot of buffalo sauce was very salty and too hot, but this was slightly sweeter which made them tastier. I’m not convinced that the cheesy topping added much, but Emily welcomed the flavour that it lent the wings. The chicken itself was meaty and moist, cooked well. We have always held up the chicken wings at The Major Oak pub in the city centre to be the best, but these are a worthy rival.

The sides were ok – fries were too thin and small but plentiful while the celery portion was too large, but both were ok. Emily insists that she likes celery, but we all know that is a lie as she only eats the blue cheese sauce that is served with it. She eats a couple of sticks in an attempt to save face but ultimately regrets the decision. 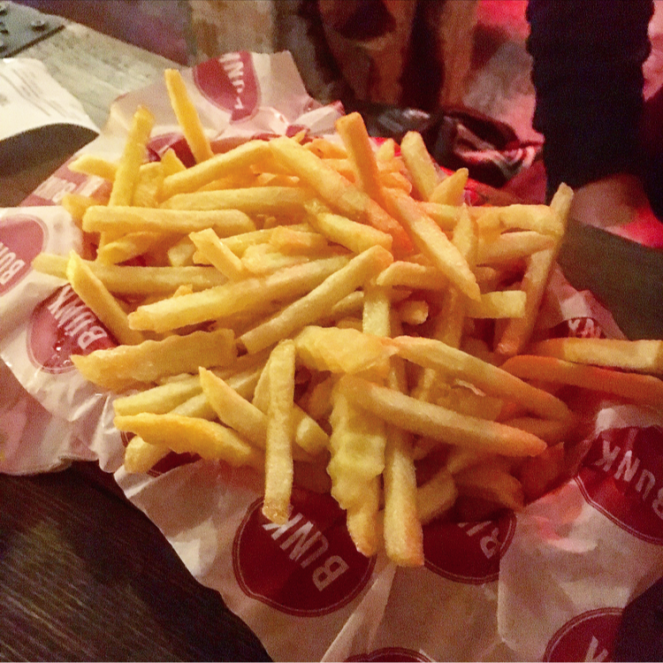 So overall a nice meal – it was tasty and quick and ended up being very cheap. Bunk have extended their half price wings offer from just Monday night to every night before 9pm and all day Sunday which means that you can order 20 wings for just £6! The cocktails were also only £4. For value, this cannot be beaten, and for a mid-session snack would be a great option. We’ll just make sure that we make better wing choices next time and update you on which flavours we prefer. I’m thinking teriyaki…..

*Emily said they were dead good