So, you remember when we reviewed Carluccio’s and declared all Italian chain restaurants to be rubbish? Well, on a recent day trip to Sheffield our first choice of eatery wasn’t available (okay, we couldn’t find it) so we decided to wind our necks in and go to Piccolino’s. We have had the Sunday roast platter at the Nottingham branch and were impressed, plus their set menu looked like it offered good value. With rumbling bellies, we thought we would see how it stacks up against its Italian chain brethren.

Unlike the Nottingham branch, the Sheffield restaurant is bright and spacious with a busy outdoor heated dining area. 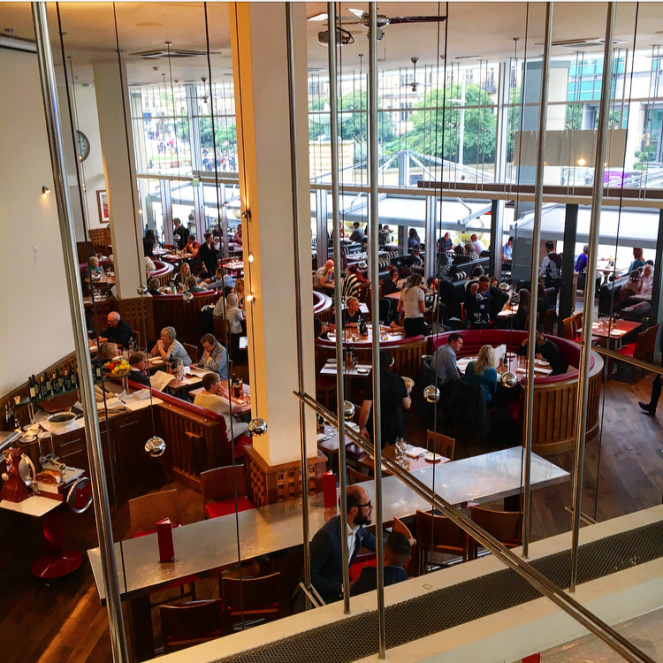 Unfortunately, our table was by the only door to the outdoor area which meant we had to view waitresses struggle to open the door while carrying plates of food, letting in a cold wind. My chivalrous side was tempted to keep getting up and opening the door for them but fortunately my chivalrous side can be easily suppressed with large amounts of food.

Before looking at the set menu, in a moment of craziness I decided to peruse the a la carte where a cheeky little crab ravioli caught my eye. I’d already decided on the garlic and rosemary garlic bread for my starter (garlic and rosemary are a combo that I can rarely pass on) and after a quick tot up I calculated that my choices from the a la carte were only 50p more than the set menu price so I decided to treat myself because I’m worth it.

Emily meanwhile was being a lot more frugle and chose from the set lunch menu. She selected king prawn bruschetta to start and the butternut squash ravioli to follow. We also ordered a bowl of olives to nibble on until our starters arrived. Unfortunately the wait staff obviously thought this was a crazy idea and bought the olives with the starters (which took an excruciatingly long time to arrive), rendering them a bit redundant.

I imagined my garlic bread starter to be served on a plate but instead they decided to serve it as a giant sharing bread placed on a high stand at eye level, blocking the view of my lovely eating companion. Emily however declared that it had been a long train journey and was glad for some me-time so it wasn’t an issue for her. The bread itself was crisp and had strong rosemary flavours which overpowered any garlic that may have been there. The addition of balsamic vinegar definitely added to the flavour (pro tip: when adding this, gauge how fast the liquid pours to avoid drowning your food and plate in vinegar. Oops) I also found that as it was a sharing bread it was too large for a starter and would definitely have worked better as an accompaniment to a main course – but then that’s probably my own stupid fault for ordering it. Emily’s starter was a rather lacklustre affair. We expected crunchy bruschetta and sautéed king prawns, but the reality was…soggier. The one small chunk of untoasted bread had turned to mush in olive oil and the three prawns were cold and plain like they had been sat in a bucket of water in the kitchen. There was also no hint of chilli or citrus either, really. For £7, this was absolutely not worth it and a disappointment.

Another annoying service issue we had was that the waitress was very keen to clear our plates even though we were still eating. She asked once if we were finished, which we informed her we weren’t (through mouthfuls of food, for effect) and then reappeared one minute later and cleared our plates anyway. I heroically managed to save the last olive, but unfortunately Emily couldn’t rescue the last slice of garlic bread. Man down. On the plus side, I was surprised to see that Emily was still there behind the garlic bread stand and hadn’t taken the opportunity to flee.

Our faces were ones of dismay when our main courses arrived. 6 measly ravioli parcels each didn’t look like a substantial meal for us weary travellers. If only we had some garlic bread to accompany it.

My initial dissappointment was soon a distant memory however when I tasted the first crab ravioli.

The beautiful crab flavour was predominate as you’d expect but the chilli, lemon and shellfish butter complemented it perfectly. The pasta tasted amazingly fresh and was cooked to my exact preference, slightly al dente. This dish was a huge success in my eyes. 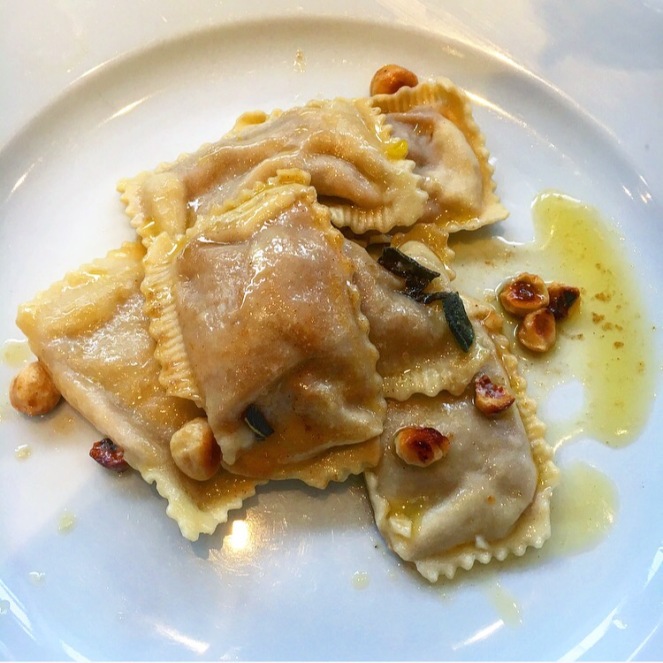 Emily’s ravioli was a bit confusing. The butternut squash filling was made with amoretti biscuits and the ravioli tossed in a sage butter with toasted hazelnuts. This is such a smart list of ingredients and  could have been a spectacular dish if the balance of sweet with savoury was right. But, unfortunately, it was just far too sweet. Just a hint of almond from the amoretti biscuit would have been delightful, but they were overpowering to the point of almost making this a dessert! Had the sage been stronger and the butter saltier it would have lent a savoury edge, but alas these didn’t quite have the gusto. A generous added sprinkling of Parmesan and salt and pepper balanced the dish a bit and (especially wth those crunch hazelnuts) it was enjoyable – just tooooo sweet!

So, overall a fun dining experience with highs and lows. After eating the crab ravioli I can’t completely write off chain Italian restaurants but they are still way down on the list of places we’d choose to eat at. Emily’s complaints about a cold, soggy starter and strange flavour combinations on her main dish means that we can’t really recommend it. Soz.