Browns has always considered itself in the upper tier of Nottingham eateries and we have had plenty of good meals there in the past. Consistency, however, appears to be their problem. Sometimes the food is amazing and other times we’d rather have spent our money elsewhere. The arrival of a £15 voucher when you spend £40 in my inbox however persuaded us that we’d give it another go.

The first thing that we noticed on this visit is how poor the service was. We needed to be out within an hour so weren’t very impressed that we were waiting 5 minutes before we were even seated, and then waited a further 10 minutes to be presented with the menu. The trend continued, resulting in a rather unsightly (but impressive) dash to the parking meter to put another £1 on the car.

As we were in a hurry, we decided to go straight for the main course. I opted for the duo of lamb from the signature menu as I had ordered this before, and at the time declared it to be amazing. The dish was £16.95 which is steep but, I thought at the time, worth it. 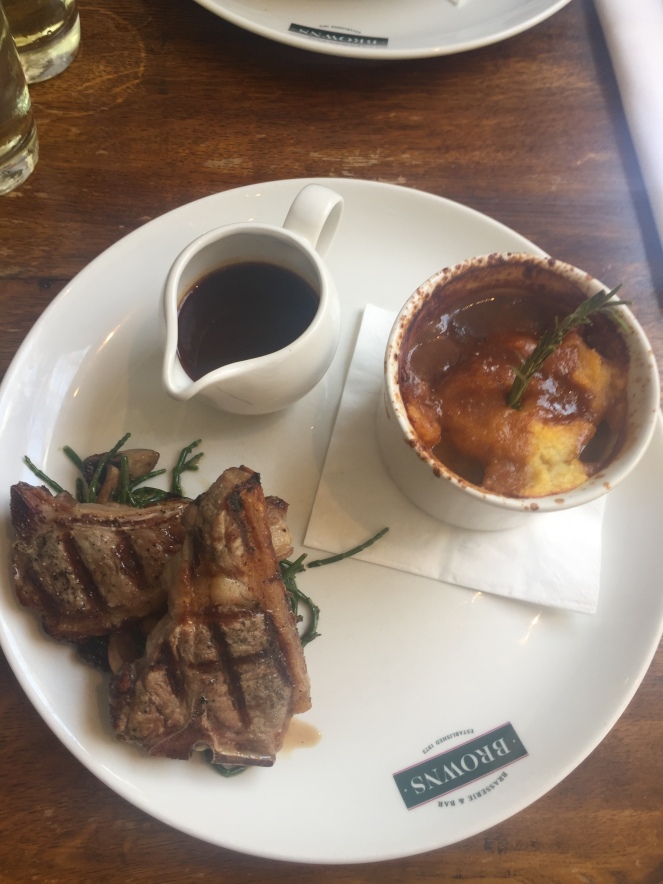 Unfortunately, this time it didn’t live up to expectations. The dish comprised of two lamb cutlets sitting atop a bed of samphire and chestnut mushrooms with a red wine jus. This was twinned with a shepherd’s pie made with pulled lamb shoulder and topped with creamy mash.

Although they were perfectly cooked, the cutlets were small and unsatisfying, both containing more fat than meat. The samphire, mushrooms and jus worked really well with the rest of the dish, however, and just about saved this half of the duo.

The shepherd’s pie was a disaster. I remembered this being the star of the dish last time, with succulent lamb shoulder in a beautiful gravy, topped with creamy mash and a hint of rosemary throughout. This time it couldn’t be further from that memory. The first issue was that it was served way too hot. So hot in fact that I had to eat the cutlets first which made my main into a two-course affair. Next, the meat was overcooked to the point where it had partly dissolved into the gravy, while the vegetables in the dish were almost raw and crunchy! I’ve no idea how the chef managed to pull off such a feat, but I wish he hadn’t bothered! The final insult was that the mash had also been overcooked and had melted into the rest of the pie adding to the pile of mush. It arrived looking very impressive and huge, but upon digging in she realised it was very shallow so not as massive as first thought. Unfortunately, this dish was also a let down. The white sauce was thin and floury while the seafood variety was almost criminal: the only fish was salmon chunks (most of which were stuck to the bottom of the skillet), three prawns and a single scallop in the centre. One scallop!! Stingy for the price of this dish. The mash on top was more like a thin purée with no crunch, adding to the disappointing, sloppy texture.

For dessert I went for the sticky toffee pudding. I don’t have much experience of puddings, having only been recently converted by Emily, so this is only the third sticky toffee pudding I’d ever eaten (after Hart’s and ThaiKhun) and it was easily the worst. The pudding itself was too solid and wasn’t sticky enough. The ginger ice cream that it was presented with was nice, but together made the whole dish taste of cheap Jamaica cake – not a success. 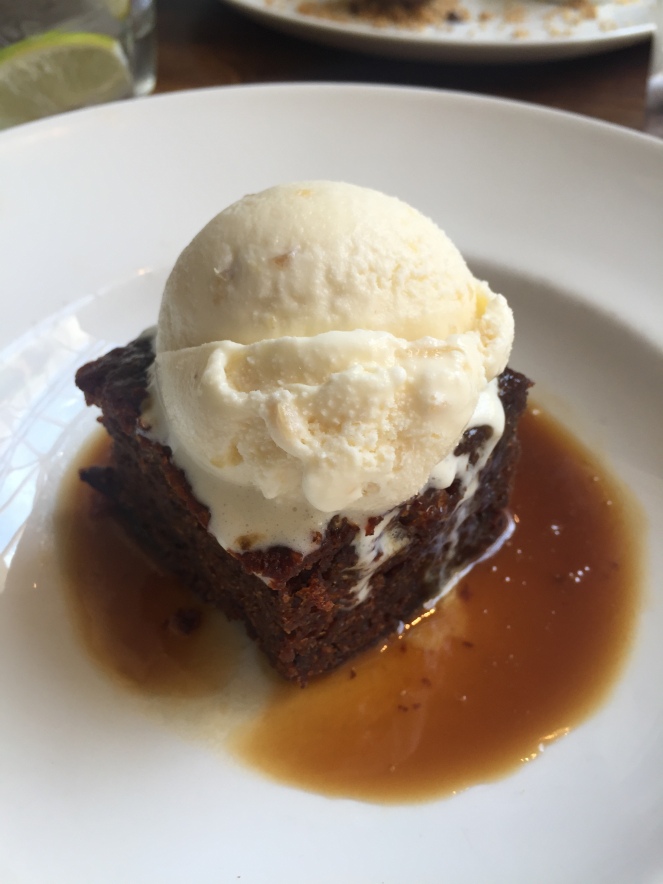 Emily had the trio of chocolate 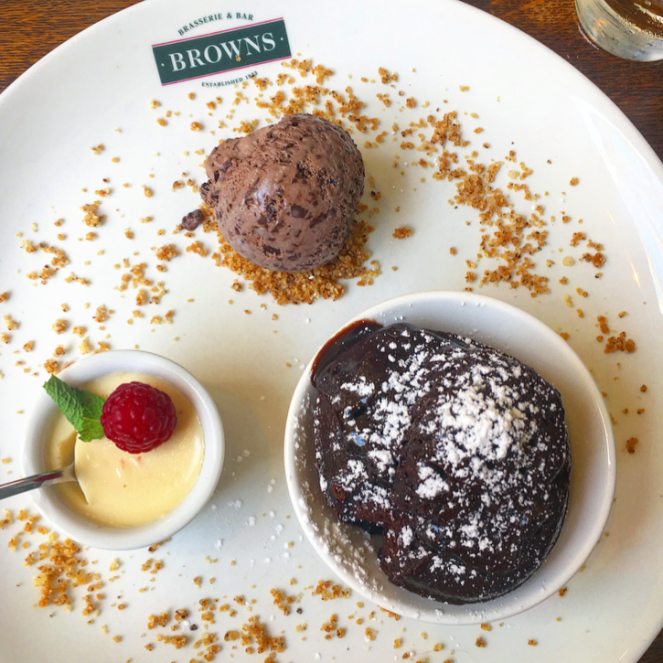 The fondant: soft, velvety chocolate cake with a melt-in-the-middle centre, right? Wrong. It was overcooked to the point of being inedible and it was left. There was no melty, oozy centre only a hard, lack-lustre cake. If you’re going to call it a fondant, don’t get it wrong.

The white chocolate pot: the best element of the dish and perfectly pleasant; smooth, creamy and chocolatey. But altogether uninspiring.

Chocolate ice cream: just give us some Ben and Jerry’s instead. It lacked depth of flavour and had small chocolate flakes which just made it gritty and unpleasant.

Overall, Browns need to work on its consistency of food quality. As mentioned, we have eaten there in the past and been very impressed, but if they cant get it right everytime why take the risk? This was a particularly bad meal and there are plenty of other restaurants in Nottingham that consistently produce food at a better standard than this for half the price. There seemed to be no care taken (and the restaurant was very quiet). We won’t be wasting our time again…

Until we get emailed another discount voucher, perhaps!

2 thoughts on “Browns Brasserie and Bar”