It has felt like summer has finally arrived in Notts (ok, ok, apart from the odd shower) and with the changing seasons, good restaurants will update their menus to bring you the best produce for that time of year. So, it’s out with the cottage pies and in with the lighter, fresher dishes that are better suited to warmer weather. Merchant’s at the Lace Market Hotel do this foodie switcheroo fantastically well and even adapt their Market Menu on a weekly basis to bring you the best of what’s around. This not only means that you always get great grub but that you can guarantee there’s something new to try every time you visit.

We ate from the Market Menu on this occasion; the set menu that goes for £14.50 for two courses and £18.50 for three. The first thing to mention is that I feel Stuart made much better menu choices than me as I got serious food envy on this trip. Some of my dishes weren’t up to the ‘wow factor’ and quality that Stuart’s were and what we’ve become used to from Merchant’s. If there was one thing to take away from this particular day it was to work on the consistency of the execution of the new Market Menu. I have no fear that any kinks will be quickly worked out.

The service, as always, was faultless – the staff here are lovely, friendly and great at what they do. Although, I did order a lamb starter and was told ten minutes later it was off the menu so I had to order something else quickly. I ended up with two fish-based dishes for starter and main which I had deliberately tried to avoid! I have had a crab linguine starter from Merchant’s before, which unfortunately was better than this one. The pasta was well cooked and the chilli added a  fresh kick but the rest of the ragu was just a tad mushy and bland. Rather than flakes of springy white crab and firm, green avocado, it was more of a brown paste swirled through which lacked in seasoning and bite. It was supposed to have cherry tomatoes, but I had only half a tomato in the whole dish. As you can see from the picture, the coriander garnish was yellowed and wilted – a sign that it’s old. Not good.

Executed with a lighter touch and more attention this could have been a perfect summer dish, but it fell a flat. I have come to expect more from Merchant’s.

On to the standard we have come to love for Stu’s starter: Stu’s starter was delicious, the parfait was creamy yet light in texture with a more delicate liver flavour than you would expect from a pate or rillette. It was well seasoned and went perfectly with the red onion marmalade which Stu said was excellent. The toast was lovely but he could’ve done with another slice and foregone the salad. A really tasty starter that set a good tone for Stu’s menu choices – excellent flavour, a delicate touch and great ingredients. 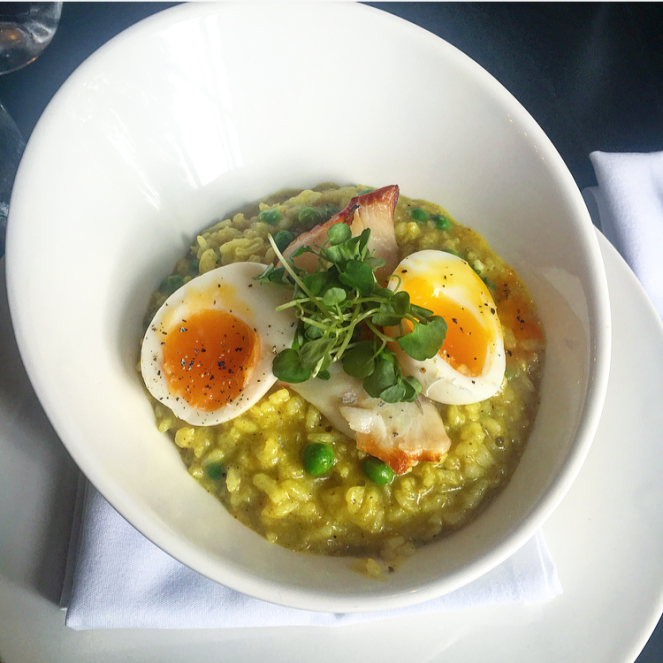 I’m  guilty of ordering anything with a poached egg (I’m a bit obsessed) so a kedgeree was an easy choice for me. Often served for breakfast, kedgeree is a base of curried rice with smoked haddock, peas and a hard  boiled egg. Kedgeree I’ve had before has been much drier in texture (more like a pilaf) than the risotto-like version that Merchant’s serve. The first thing to note is that, although the flavours were largely ok, the balance of the dish is off. The ratio of risotto to the very small piece of smoked haddock was baffling – I had to leave more than half (and I never leave food!) The eggs were delicious and the fish was flaky if a little dry, but the risotto let this dish down; far too much of it, a gluey texture and too strong on the cumin/spices which made it bitter and unpleasant.

Pigeon with heritage beetroot and jus 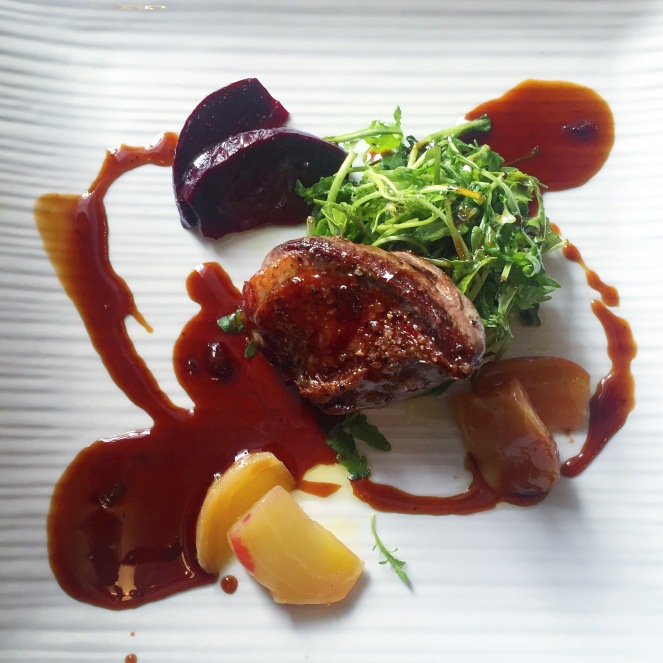 The shining star of our experience, this pigeon was to die for. The large, meaty piece of perfectly cooked, tender pigeon breast was served with three types of heritage beetroot to add a delightful earthiness. The rocket added a lovely green, peppery taste and the jus had an incredible depth of flavour that elevated the whole dish to faultless. THAT JUS!!! We made sure no-one was watching and scooped up the leftover just from the plate with our fingers! Foodgasm.

We feel this is what Merchant’s is all about. A few interesting ingredients cooked perfectly, and faultless execution with refinement. It beat big-hitters La Rock’s pigeon dish hands down. Well done, Chefs. 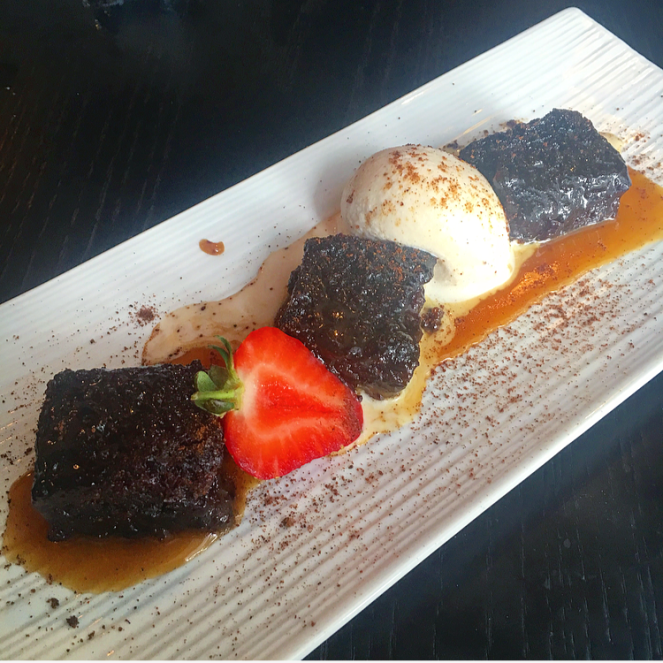 I was surprised to see this winter warmer on the summer menu, but when it arrived we understood – rather than the big, rich, dense traditional sticky toffee, this was gorgeous little chunks of moist, sticky cake with a lovely, creamy vanilla ice cream and caramel. A much lighter feel but still with that beautiful toffee flavour that comforts so well – we wish we hadn’t shared!

Overall, this was a good visit with some real gems, but I feel I was hard done by with my menu choices as they weren’t as delicious as Stu’s. It felt hit and miss. The negatives were in execution, dish composition or flavour balance so I do think this can be easily fixed to make the menu consistently great.

The new Á La Carte menu has also launched with some irresistible dishes on it (côte de boeuf, anyone?!) It also has a selection of dishes where Ben Chaplin and sous chef Terry Hayfields present their take on homely classics – a really nice touch, especially since this is the area in which they seem to really excel. We will definitely be returning to try this selection. The Á la carte menu doesn’t seem to be online just yet, so here’s a lovely picture of it: