Before seeing Independence Day 2 (don’t judge – it was shameless, cheesy action!) we popped in for a bite to eat at the Le Bistrot Pierre in Nottingham city centre. We have eaten here before (and at the Leicester branch) but not in a long time so we were looking forward it seeing how they are doing these days. Because of its close proximity to both the Cineworld and the Theatre Royal/Royal Concert hall, Le Bistrot Pierre is very popular with the pre-theatre crowd. Not realising there was a Beatles tribute act (!) at the Concert Hall, we had to be squeeeezed in when we arrived at 5.45pm. If you want to eat from the pre-theatre menu you must order before 6.45pm, so make sure to go early! The menu is £14.95 for two courses.

The service was great, we had a lovely french server called Zoé and she was very warm and attentive. Drinks and dishes came out at quite a speed which is always appreciated when you have somewhere to be.

We shared a carafe of Cuvée 94 red wine (house red) which was tasty enough and went nicely with our menu choices.

Described as a pâté of shredded rabbit and pork served with sourdough toast and cornichons, Stu’s starter was really enjoyable. Although we were expecting the pâté to be much coarser, it had a fantastic depth of flavour with an intense meatiness that really was delicious. The vinegar tang of the cornichons matched perfectly, cutting through the creaminess and adding an appreciated sharpness. The sourdough was served warm which was tasty, but once it had cooled it was a bit too hard and crunchy. My starter was marinated and honey-roasted heritage beetroot salad with Ste Maure goat’s cheese, toasted pumpkin seeds and lemon vinaigrette. I can’t help but compare this to the beetroot and goat’s cheese salad starter we had at Hart’s recently and the Bistrot Pierre version isn’t quite as good -BUT – it is still really nice. The goat’s cheese was particularly delicious, it is a blue cheese that’s strong and oozy goes really nicely with the citrus marinade on the beetroot. The salad however was a bit limp and the pumpkin seeds weren’t toasted at all. I did have a piece of beetroot that was much more under-cooked than the rest. It’s a solid starter and the balance of flavours is enjoyable, but the execution wasn’t perfect. The Beef bourguignon is some what of a signature dish for Le Bistrot Pierre and for good reason, it is  good and tasty. A hefty hunk of fall-apart braised beef soaks in a gravy enriched with shallots, mushrooms and pancetta which really is yummy. It feels like good, warming comfort food (perfect for July evening?) My only qualm is that, although there was a generous amount of beef, there needed to be more of everything else! There wasn’t enough sauce and I swear there was only two chunk of pancetta. I ordered extra bread to mop up the juices but there wasn’t any in the end!

It came with two sides of seasonal vegetables and potatoes, the veg were dried out and lack-lustre but the potatoes were yum – soft, salty and crispy. 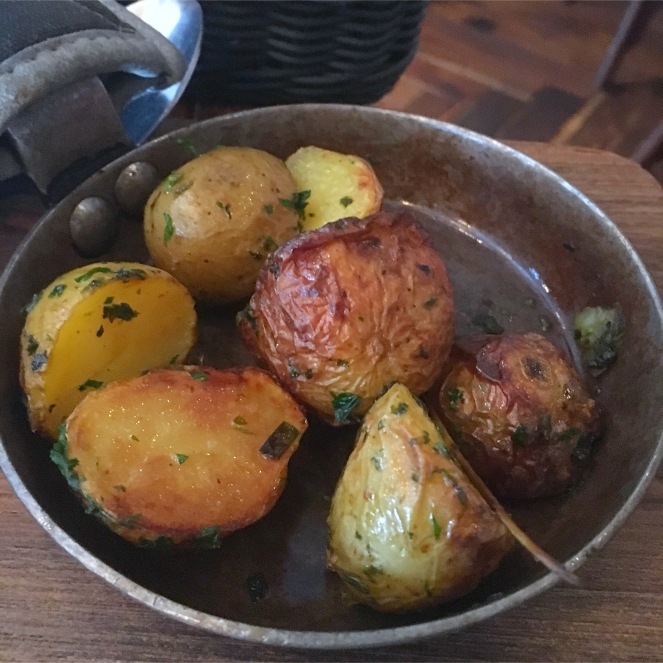 Stu ordered the 7oz rump rare and it came as such, however he could tell it wasn’t a great quality piece of meat. There is no supplement charge for the steak on the pre-theatre menu which in one hand is good for value, but it seems the compromise might be the cut. The salad was unfortunately pathetic – four very limp leaves dowsed in oil and not much else. The garlic butter had an artificial taste to it, however the frites were really tasty.

We didn’t order dessert this time as we were really full (but I can recommend the creme brulee). As far as fixed price menus that are designed to get you watered, fed and turned around as quickly as possible, this one isn’t bad. Although certainly not gourmet, you can do much, much worse at the eateries on Foreman St nearby so we would recommend Le Bistrot Pierre if you want a good, tasty and quick meal before a show or the cinema.

The bill came to around £40 for two courses each from the pre-theatre menu and a carafe of house red wine.